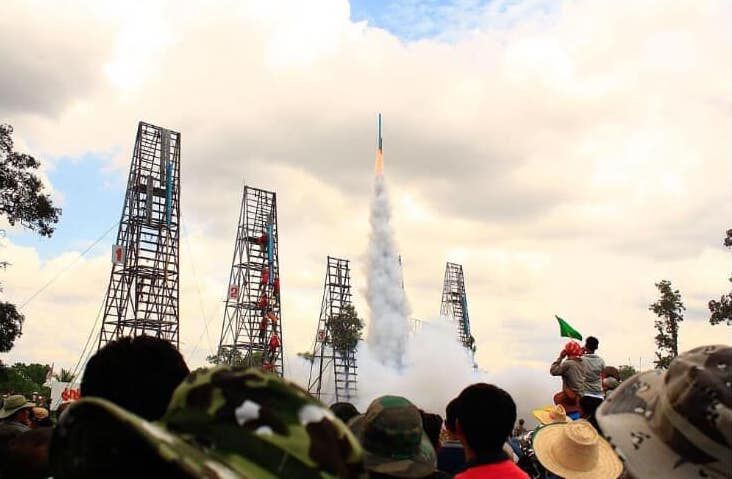 If you’re craving a pyrotechnic spectacle to fill the gap between Chinese New Year and the Fourth of July, then head northeast to Isaan in mid-May for “Boon Bang Fai” — the annual Rocket Festival. Here you’ll watch teams of tipsy farmers guzzle bottles of local brew and rice wine as they climb rickety bamboo scaffolding with large projectiles slung across their backs, then fire them off above green fields into the clear blue yonder.

An annual Thaiger favorite, the Rocket Festival takes place every year in mid-May in farming villages across Northeastern Thailand and Laos. The Boon Bang Fai of Yasothorn Province is one of the largest and most well-known of its kind in Isaan. Armed with plenty of gunpowder, bamboo scaffolding and blue PVC pipe, ethnic Lao locals, many of them farmers, launch homemade rockets into the sky to mark the beginning of planting season and to hasten the annual monsoon rains.

Cancelled in 2020 and 2021 due to Covid-19 restrictions, locals in Yasothon are eager to bring it back with a blast. If it gets the green light from local authorities, this year’s fiery festivities promise to offer the most bang for your buck, literally — as locals seeks to unload their surplus of gunpowder and bamboo rocket tubes. Keep a tab on their Facebook page for further announcements regarding this year’s festivities.

The festival begins with parties and parades on Friday, during which they flaunt their aerial inventions through the town. Lasting late into the evening, the festivities also feature plenty of Isaan music, traditional beauty pageants, special markets, and cultural dance performances and competitions. Of course, there’s also plenty of alcohol, crude humour, phallic symbols and sexual innuendo, a vestige of its origins as a pre-Buddhism fertility festival.

The rocket launching competition begins on Saturday. The rockets are scored for their perceived distance and the beauty of their smoke trails in the sky. It’s a source of pride to have the highest-soaring rocket, while losers of the competition are thrown into a large mug pit for good-humoured humiliation and cheap entertainment. The mud pits also serve as makeshift fire extinguishers in the event of an unexpected fire or explosion. Rockets can reportedly reach six meters long, exceed 100 kilos and soar for up to five minutes — if they even get off the ground. In the recent past, people have died or been seriously injured due to failed rocket launches and explosions, so spectators are advised to watch from afar to stay safe.

Getting There: It’s a seven-and-a-half-hour drive from Bangkok or a 1 hour 10-minute flight from Suvarnabhumi Airport to Roi Et Airport, then a short bus ride to neighboring Yasothon province in Isaan (Northeast Thailand).