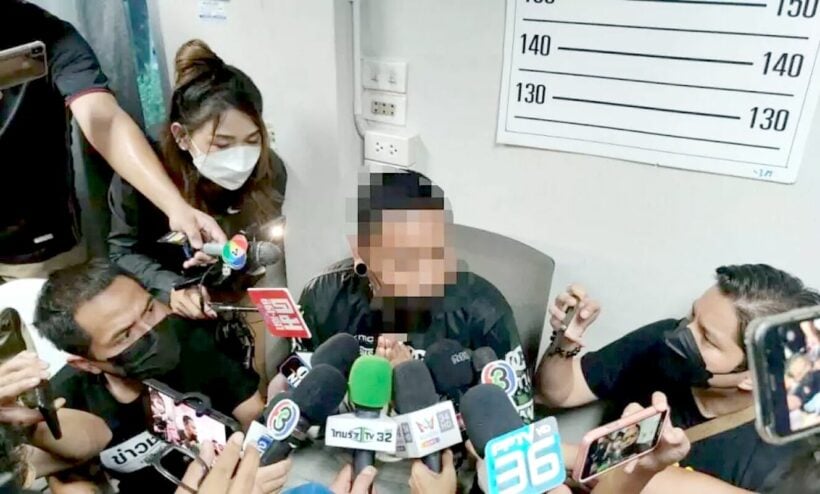 People in relationships fight and reconcile all the time, but this case is a bit more extreme. The man accused of splashing acid in his ex-lover’s face outside of a Don Mueang salon has turned himself in and is asking his estranged wife to take him back. He says that his motivation was to disfigure the 25 year old woman so she could not remarry and they could reunite.

The shocking video went viral on Thai social media, showing the moments just after the jealous lover splashed acid on the woman’s face outside of the salon where she worked as a manicurist. The security camera video shows a startled shopkeeper rushing to open the door followed by the woman running blindly across the shop screaming and stumbling as she lunges into the bathroom to rinse the chemicals off her face.

Police in Pak Thong Chai in the Northeastern province Nakhon Ratchasima confirmed that the wanted man is now in custody after turning himself in. Though initial reports identified him as the woman’s live-in lover with one child, but new information clarifies that the man who threw the acid is apparently the victim’s ex-husband. He said he ordered the harmful acid off the Internet.

The man told police investigators after being sent back to Don Mueang that he and the woman had three children together, plus a fourth child from a previous relationship. They had a tumultuous relationship, having broken up and gotten back together several times. He even accused the woman of having an extramarital affair. Eventually, they could not overcome their difficulties and they split up, but the man wants her back.

The Don Mueang Police Chief had said that the acid attack perpetrator will be charged with assault as a minimum. Once the woman has been fully treated for her injuries, police will assess the damage and may impose further charges. Today they upgraded the initial charge to grievous bodily harm threatening the life of the victim and once evidence and statements are collected, that charge may be raised again to attempted murder.

The jealous ex-lover apologised to the woman and pleaded for her to take him back so they can be a happy family again. She remains in the hospital being treated for the acid wounds, with doctors saying they will have to peel off all the skin touched by the acid to preserve deeper layers of skin.

And regarding his ex-wife’s alleged affair? The man, who viciously attacked the woman, likely permanently disfiguring her, said he will forgive her for her indiscretion.