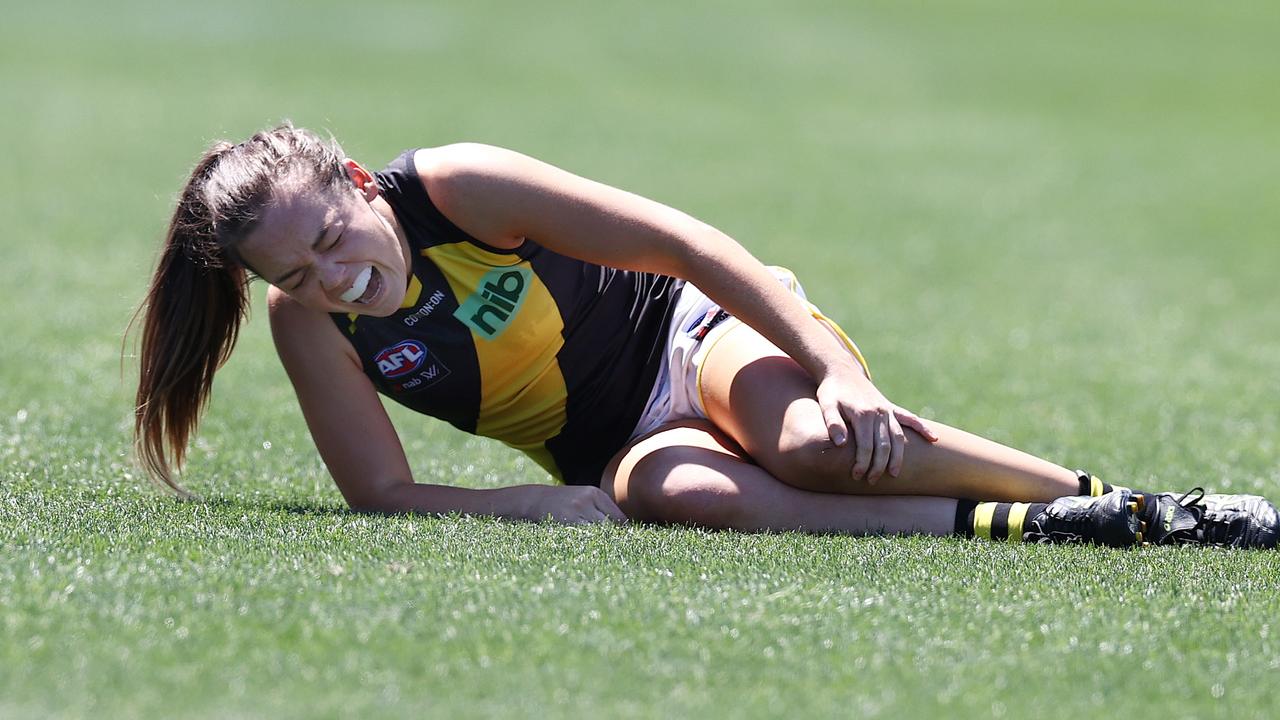 AFL Women’s players are copping a new spate of injuries and the impact reaches far beyond the footy field for part-time players juggling work, study and family.

AFL Women’s players are “living on the edge” as they tackle the far-reaching effects of sustaining a long-term injury.

Tigers women’s football boss Kate Sheahan said that players – who are part-time – are not only dealing with the physical injury itself, but the flow-on effects to employment, study and family in addition to short-term football contracts.

But Richmond has affirmed its commitment to supporting its players who are injured with 12 months of support whether they remain contracted to the team or not.

Richmond – which is battling personnel issues after a torrid run of impact and unique injuries to its players over recent months – fell short of the Bulldogs on Sunday and was left licking its wounds after Laura McLelland (ankle) and Hannah Burchell (knee) were felled with injuries.

The game was stopped for five minutes for Burchell – who works as a paramedic – to be taken from the field.

Both players had scans on Monday with the club still awaiting results.

ACL injuries have again been at the forefront of the women’s competition with the likes of Magpies skipper Brianna Davey and Bulldogs star Isabel Huntington among those felled, but syndesmosis injuries and broken bones have also occurred in recent weeks, spelling the end of the season for some players.

“There’s a level of anxiety around injuries within the season because the season in the players’ minds is so short,” Sheahan said.

“They feel like if they get injured, whether it’s minor or major, they don’t feel like there’s a lot of stability.

“The amount of work that goes into a player’s week-to-week schedule, managing training, managing a job, plus the Covid situation, means that players have had to be incredibly flexible with when they play, train … it’s almost like you are literally living on the edge, always.

“‘Have I had enough sleep after work? To recover from a game where I’ve played in 35-degree heat, two players down without rotations?’. It’s tough for them.”

Tigers vice-captain Harriet Cordner – who works as a teacher – ruptured her ACL last month and has received overwhelming support from her employer in the wake of the injury, with her mobility issues accommodated by her school.

Sheahan said the club would continue to look after all players that are injured in the AFLW program.

“Our staff don’t just see them through the AFLW season and then handball them to someone else. They will get everything that they need to recover, to not only go back to work, but to get to the point where they can play sport again.,”she said.

“Our players have access to our club psychologist, our strength and conditioning staff, our rehab physios, our dietitian, our players development manager 12 months a year. They are there to support our players the entire time, even though their contracts aren’t 12 months of the year.

“They will not want for anything.”