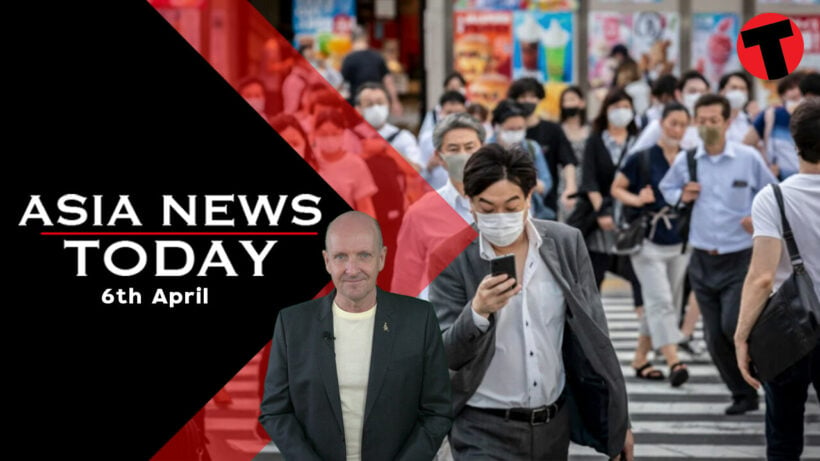 Police raided a house in the northern province of Chiang Rai yesterday to find 71 Burmese migrants hiding inside. A Thai man who was also inside the house told police he was hired to pick up the migrants who had illegally crossed over the border from Myanmar and transport them to the house.

The migrants told police they were heading to Bangkok to find work. Unrest in Myanmar is ongoing since the military coup that took power in the country 14 months ago, and Burmese people continue to illegally cross over into mostly Thailand to flee the situation.

A civil war has broken out in the country between the military and a range of ethnic or politically-based opposition groups, calling themselves “the Campaign for Civil Disobedience”. The CDM has organised mass protests against the coup, but the military has responded with ruthless violence against civilian militia and airstrikes on civilians.

The Assistance Association for Political Prisoners says 1,503 Burmese people have been killed since the military regime came into power last year.

In March, Thailand’s inflation saw its highest monthly jump in 13 years, rising to 5.7% year on year. That’s according to the Commerce Ministry’s Office of Trade Policy and Strategy, which pins the blame on the war in Ukraine and western governments pouring stimulus into their economies, which has artificially pushed up fuel, food and electricity prices.

In response, the office has increased its 2022 inflation projection to 4.5%, up to 4 times higher than its earlier projections. The new projection was set assuming a growth rate in the Thai economy of 3.4-4.5%, a crude oil price average of 90-110 USD a barrel, and a THB-USD exchange rate of 32-34 baht per dollar.

Meanwhile, Thai consumers are feeling the real-world bite of a higher inflation rate. In March alone, energy prices increased by 32.4%, nearly a third more expensive than in February. Oil prices saw a 31.4% increase, while electricity increased nearly 40% (I can attest to the last one!).

Prices have also surged at the supermarket, with dairy products up to more than 6%, vegetables up nearly 10% and meat up nearly 6 percent. Naturally, street food has also been affected, with prices for common dishes such as curry and noodles up more than 8%.

And whilst we’re on inflation…. South Korean consumer prices grew at the fastest pace for more than a decade last month, filed by all the same issues that are pushing up prices around the region.

The acknowledgment is believed to foreshadow the Bank of Korea to lift interest rates at its next meeting to bring the price rises under control.

The consumer price index jumped 4.1 percent year-on-year, the fastest pace for 11 years, with officials predicting it is likely to go even higher.

It also marked the 12th consecutive monthly rise, caused by a spike in the cost of goods and services as well as surging fuel and raw material prices.

Growth in Asia is expected to keep largely on track this year, until at least next year, as most countries in the region ease into their post-pandemic strategies, despite headwinds coming from the war in Ukraine. This assessment was from the Asian Development Bank yesterday.

The Manila-based ADB says that gross domestic product across Asia would settle around 5.2 per cent this year and a project of 5.3 per cent next year after last year’s 6.9 per cent across the region.

ADB president Masatsugu Asakawa says that whilst the pandemic “is by no means over”, and Russia’s invasion of Ukraine is rattling commodity markets, Asia will continue to be affected.

He also noted that monetary tightening in the US may also lead to global financial instability.

Hey said… “Growth will remain uneven. South Asia will continue to grow strongly, growth will pick up in South-east Asia and the Pacific, normalise in East Asia, and slow in the Caucasus and central Asia due to Ukraine”.

The ADB predicts that East Asia – which is still seeing a flare-up of Omicron outbreaks – will experience an economic slowdown of nearly 5 per cent in 2022.

Speaking to journalists yesterday, Admiral Samuel Paparo, Commander of the US Pacific Fleet commented that…. “the window for potential “unification by force” of Taiwan with China is “highly unpredictable”.

He noted that China was “undoubtedly… watching the events in Ukraine and taking notes and learning from it and that China will improve their capabilities based on what they learn at this time.”

He went on… “There are many, many complex factors that would play into a People’s Republic of China decision to attempt to unify Taiwan by force to the mainland itself. And I think it requires constant vigilance.”

Admiral Paparo is visiting Thailand, Singapore and Australia this month.
“
He also noted… “I always operate under the notion that there’s the potential of conflict within our region…. nobody could have predicted the current war in Ukraine”.

The Admiral also commented on operational engagements with China’s naval forces in the region, saying there was professionalism and respect on both sides at this time.

Indonesia’s Minister of Education, Culture, Research and Technology has not supported Malaysia’s suggestion to make Malay the second language for ASEAN, the ten-country trade pact for the South East Asian nations.

The Minister says that it’s more feasible to consider the Indonesian language, Ba Hasa, a variety of Malay, as an ASEAN language, taking into account its historical, legal and linguistic advantages.

Malay, or versions of it, are spoken in only 3 of the ASEAN countries… although it’s listed as one of many languages used in Singapore, and a version of it in the very, very southern parts of Thailand. The official working language for ASEAN currently is English.

The Indonesian minister’s statement came after the Malaysian PM said on Apr 1 that President Joko Widodo has agreed to Malaysia’s suggestion to propose Malay as a language of ASEAN one day.

Last month, The PM said Malaysia would discuss with regional leaders to make Malay the second language of ASEAN.

The minister also wrote in his Monday statement that at the international level, Indonesian has become the most common language in Southeast Asia, simply through sheer numbers – the population of Indonesia is 275 million.