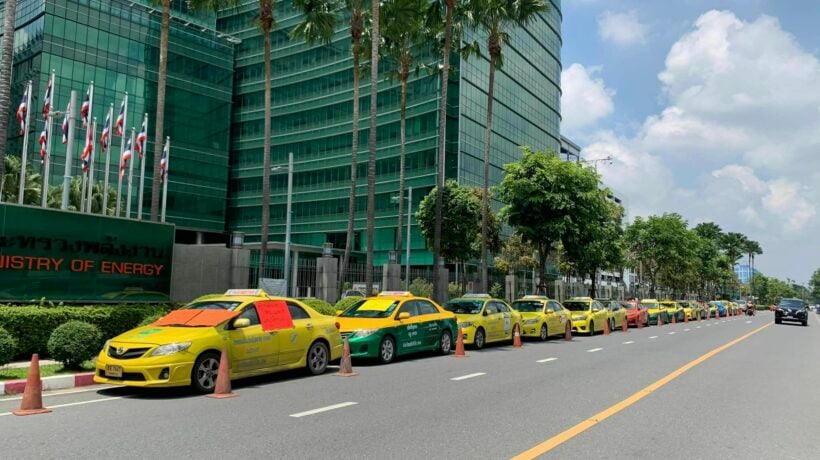 Furious Bangkok taxi drivers today protested against the price hike of autogas, LPG and NGV, in front of the Ministry of Energy.

The President of the Thai Taxi Association, Witune Naewpanich, urged the government to support them after the recent price increases.

Witune announced taxi drivers’ income decreased because of the pandemic because no one used them during Covid-19. He also added that they weren’t allowed to increase fares yet the price of fuel increased time after time.

Witune stated that the association would request the Energy Minister, Suphapong Panmechao, to launch four supporting measures, including

Today, the Thai media reported that more than 100 taxi drivers gathered in front of the Ministry of Energy from noon onwards. They parked their cars along the road in front of the ministry, and each driver held up signs complaining about the fuel hikes. The signs said…

“How can I survive with debt?”

“Survive from Covid-19 but die of debt”

“It’s not just the COVID that can kill us; it’s also the gas price.”

One taxi driver told a reporter that he had to pay 600 baht per day for autogas. The driver said before he only paid between 200 to 300 baht. He added that it used to be about eight baht per litre, but now it is 15 baht.

The driver said he earns about 1,000 baht per day but half of that went on fuel, and the rest was for food and car rental fees.

A representative from the Ministry of Energy talked to the taxi drivers and promised he would discuss it at the next Cabinet meeting and update all drivers later.