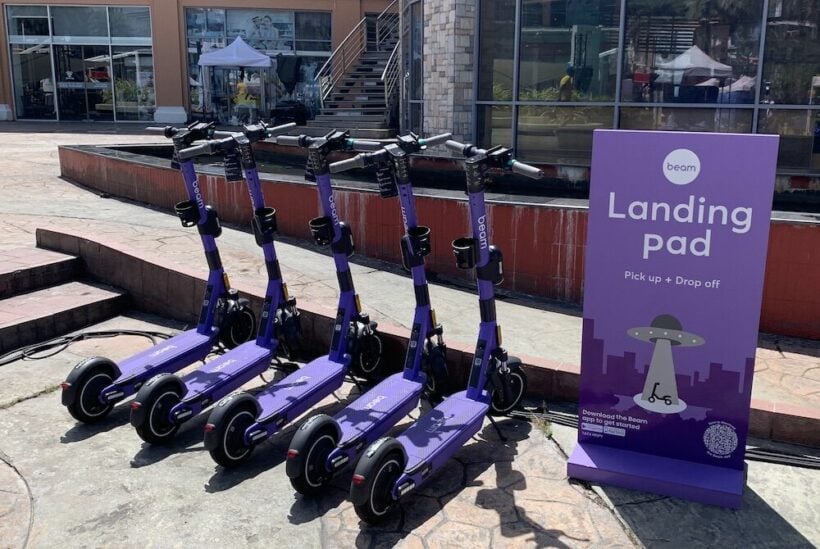 Chances are that you’ve seen these little purple scooters BEAMing around Phuket, particularly in the Laguna area, Patong, and Phuket Town.

Indeed, they are appearing in growing numbers not only in Thailand but also, for starters, in Australia, New Zealand, South Korea, Turkey, and Malaysia.

I’ve been fascinated with them, both as a business and as a ride. Who’s behind it and how does it work?

At the core, is a short-trip, two-wheeled ‘personal transportation device’ gone taxi in an Uber-style business model. But there are a couple of major modifications.

The company, Beam Mobility Holdings of Singapore, appears to own the wheels and the customer does the driving. All else is familiar, with tracking and management of the fleet on a server somewhere, and customer interface in a nice little app called, simply, “beam”.

BMH was founded with private equity in 2018 by two Singaporeans, one of them ex-Uber. The electric scooters, known as ‘Beams’, are Saturn eScooters manufactured in China.

To see exactly how the service works, I took a ride from the Dusit Thani hotel at Laguna Phuket to Boat Avenue, a distance of 1.6km. My “fare”, announced in the app on arrival, was 30 baht. The tourist price for a taxi from any of the Laguna hotels for that trip is fixed at 200 baht (yes).

BEAM provides free parking at about 18 “Landing Pads” for the more than 100 scooters based within their Laguna zone of operations. Each of these pads also serves as a take-off point. Location details are in the app. Open it and the pad nearest you is immediately evident. Just walk up to any scooter, scan the code on the handle bar and ride away. On arrival at your destination, scan again and walk away.

In the remote event that your destination has no landing pad, just park anyway. A 50 baht retrieval fee will be charged to your card… BEAM knows where the scooter is.

With so much ‘cool’ and convenience going for it, BEAM could well prove a success in multiple markets. But they could face special challenges here, given Thailand’s notorious road safety fact sheet. During my very short ride, I was definitely concerned.

The stance on the scooter is that of a slalom water skier, one foot directly in front of the other. Try that standing still with your hands close together in front of you, as on tiny handlebars. The gyro-effect of motion did not seem to add stability to my bike, already hampered by its tiny wheels, narrow platform, and my ‘first-ride’ difficulty in managing the surges of electric power.

En-route, concrete streaming under my wobbly performance, I was, among other things, honked at repeatedly, given the finger by an old woman with a dog, and then then passed by two high-speed motorbikes at the same time, one left and one right. The bike has no rear view mirrors – a serious no-no in Thailand. And helmets are not provided.

I hope BEAM will address these safety issues because their product is practical, theoretically fun, and should hold substantial appeal to tourists on an island where public transport remains essentially absent.

Meanwhile, ‘when in Rome’… more than 14,000 similar electric rental scooters were introduced to the roads and pavements of the ancient city 3 years ago, an alternative to public transportation during the Covid pandemic. According to Rome City Hall mobility, 4 people have died in scooter accidents during that time. On average, there’s a scooter-related injury that reports into emergency departments in hospitals around Rome every 3 days.

The Italian authorities say, ironically, that the main problem is that the scooters are TOO quiet, and no one can hear them coming.

Phuket also has a brief, but painful, history of app-related personal transport back in 2017. Then, the yellow Ofo bikes became almost ubiquitous overnight. People would walk to one of the many ‘stations’ around town, scan the bike with their smartphone, connect their credit or debit card, pedal around and then return the bike to any station. And the small rental fee would be taken out of the rider’s account.

Fast forward a year, and Phuket kids had commandeered the Ofo bikes left stranded around the island and the canals of Phuket Town were littered with discarded yellow bike wrecks.

Let’s hope that this new purple-power app-based electric scooters get a better run as they could add another, much-needed, alternative for transport around the island, especially for shorter journeys where the current transport is limited and expensive.