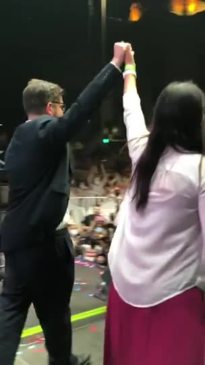 Gabriel Boric was elected as the next president of Chile on December 19, beating his opponent Jose Antonio Kast with 55.9 percent of the vote to the latter’s 44.1 percent. During his victory speech in Santiago, as reported by La Cuarta, the 35-year-old president-elect drove home key parts of his campaign, including the abolition of private pensions, climate change, indigenous rights, and promising women they would be “protagonists” in the next government. Kast congratulated Boric by phone on Sunday, and said the president-elect “deserves all our respect and constructive collaboration,” according to a translation. Outgoing president Sebastian Pinera also congratulated Boric in a tweet. “You will be the president of all Chileans and you will have the mission of uniting all our compatriots,” he said. Credit: Gabriel Boric Font via Storyful