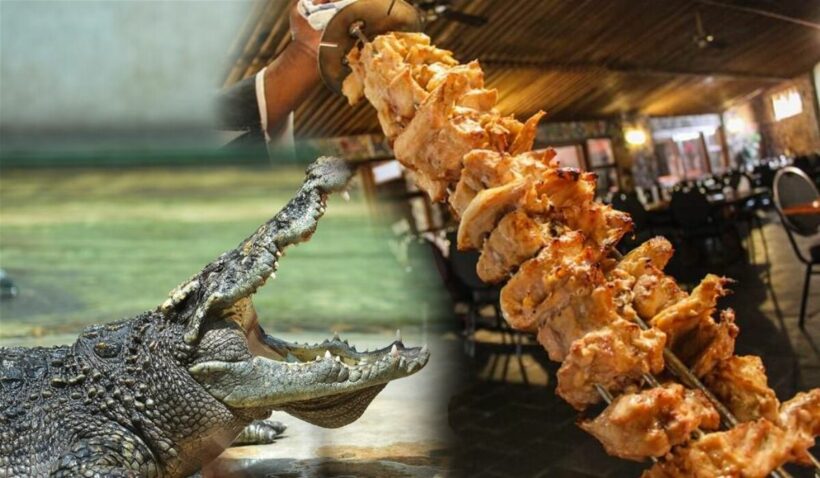 Marie Antoinette was famously attributed (or likely misattributed) as commenting, when the people did not have any bread to eat, “Let them eat croc!” Er, or something like that. But the people of Thailand have taken it to heart; as pork prices surge across the country, many have turned to eating crocodile as an alternate source of meat.

The pig price premiums are the result of the controversial spread of the African Swine Fever that has led to pig shortages and, in turn, pork shortages. And when (the cost of) pigs fly, people turn to alternative sources of meat and protein. Enter crocodile, the “pig of the swamp” (as no one calls it).

A post on Facebook Monday received nearly 2,000 comments and over 4,000 likes when a crocodile farm offered meat from their giant reptiles at 70 baht for kilogramme. With the price of hog hiked high to over 200 baht per kilogramme, people are getting on board with acquiring a taste for crocodile meat.

While considered a somewhat exotic meat, crocodile meat sticks can often be found on food markets grills, especially in touristy areas, making it not completely uncommon. Many say that it has a similar flavour to chicken even. And it is a relatively healthy meat, lean, and high in protein, making it a nutritious and affordable option with the surging sow sum.

Other crocodile farms around the country, including one in the Greater Bangkok province of Nakhon Pathom, have indicated they are receiving increased interest from customers seeking crocodile as a cheaper substitute for pork products.

The trend may continue if pork prices stay elevated or possibly surge even higher, pushing consumers to say, “see you next time, pricey porcine.” And after a while… they’ll eat crocodile.

(Apologies for all the ham-fisted puns in this article. – Neill)