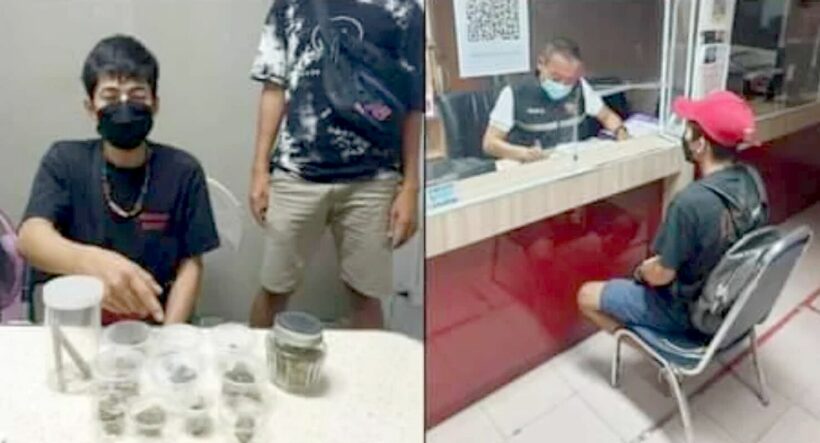 Phuket Police arrested a man for drug dealing on Bangla Road after having previously arrested him for threatening tourists with a gun full of blanks. The man, identified as Kittipong, was arrested after a post online claimed that police have been turning a blind eye to his criminal activities.

The man was taken into custody with hand-rolled ganja cigarettes, dried cannabis, and 10 Tramadol pills, a common opioid painkiller. The action was in response to a social media post late on Saturday night complaining that the police had ignored Kittipong’s illegal actions for too long.

The Phuket Provincial Police released a statement in response saying that they had not ignored him and had taken him into custody. Just ten hours before the statement, the Phuket Info Centre, which falls under Phuket Governor Narong Woonciew’s office, shared CCTV footage of Kittipong selling cocaine unabashedly on Bangla Road in Patong.

The report reiterated that Kittipong had not been allowed to freely commit crimes on Bangla Road, and that had now been arrested for his illicit mischief, though it did not state what charges had been filed against him. It also did not mention any attempt to take action against the foreigners and others seen buying and consuming drugs from the man.

There was online ire over the lack of information on whether Kittipong had been charged in April after he was arrested for waving a gun full of blanks at foreign tourists. He’d only been brought in for questioning when foreigners complained to the police, but it is unknown if any legal action was taken.

The report didn’t mention the previous incident, nor did it bring up his history of drug arrests in his hometown province of Nakhon Si Thammarat when he was a dealer on Bangla Road. Instead, it called on people to report anything that tarnished Thailand’s image for tourists.

“The investigative team brought the suspect along with the items to the investigating officer for further legal proceedings. In such a case, the actions of the accused may affect the image of tourism in the country and there are also criminal penalties under the law. Therefore, [we] would like to publicise it to our brothers and sisters if they find clues or such behaviours, please notify the police or relevant agencies so that they can investigate, arrest and prosecute decisively.”