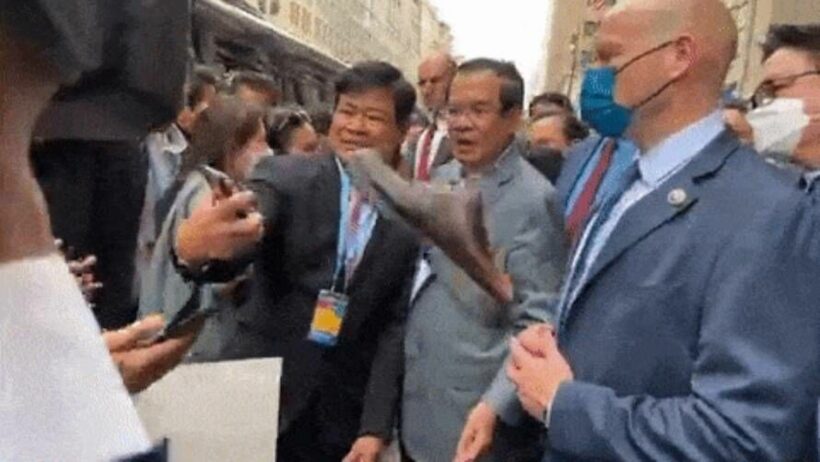 A former Cambodian soldier threw a shoe at Cambodia’s Prime Minister Hun Sen in Washington, USA, on Wednesday. PM Hun Sen visited the US capital for the first time to attend the US – ASEAN summit. The shoe didn’t actually hit PM Hun Sen, but the former soldier is proud of his attempt nevertheless.

“I feel so relieved and slept well, sleep better after I threw my shoe at Hun Sen’s head. I have intended to do this for a long time because I want him to be humiliated, nothing more than that,” said 72 year old former soldier Ouk Touch.

“My action, it was just throwing a shoe at Hun Sen, but Hun Sen threw grenades at Cambodian people, peaceful protestors. Hun Sen is a dictator, and he has killed many people, including my relatives.”

In 1997, Hun Sen committed an armed attack on his elected coalition partners. The attack helped him to stay in power after failing to win elections. A total of 16 people were killed in the attack and another 150 people were wounded. No one has ever been held responsible for the attack.

This isn’t the first time someone has thrown a shoe at PM Hun Sen. Cambodian activist Sam Sokha filmed herself throwing a shoe at a poster of PM Hun Sen and posted the video online. The video got her sentenced to four years imprisonment. She was released in February this year.

PM Hun Sen’s supporters crowded around him, 23 of which flew to Washington from Vancouver in Canada on Tuesday just to get a glimpse of the PM.

“I’m so delighted that Cambodia has a hero, who liberated us from the genocide and we have peace for 30 – 40 years and people are living prosperously,” said one of the Cambodian supporters who flew in from Canada.

The 69 year old Cambodian PM Hun Sen, who has ruled Cambodia since 1985, has never been to the White House before…

“Hun Sen’s steady accumulation of power and generally authoritarian behaviour is the primary reason why he has never been invited to the White House. But it’s also true that many leaders with similar (or worse) records have received the red carpet treatment,” said Sebastian Strangio, Southeast Asia Editor at The Diplomat.

The summit, hosted by US PM Joe Biden and attended by eight southeast Asian leaders, was intended to intensify cooperation in the area.

Myanmar wasn’t invited to the summit in light of the Burmese junta’s 2021 military coup. Human Rights Watch Asia advocacy director John Siften said that since the coup, democracy has deteriorated in Thailand, Malaysia, Indonesia Singapore and the Philippines. He said that Vietnam, Laos, Brunei and Cambodia are “not democratic at all.”

Given that Myanmar wasn’t invited in light of human rights violations, Siften urged Biden to directly address issues of deteriorating democracy and human rights abuses in ASEAN nations at the summit…

“Failing to publicly raise specific human rights concerns during the summit sends the message that human rights abuses are largely going to be tolerated in the name of forging alliances to counter China.”