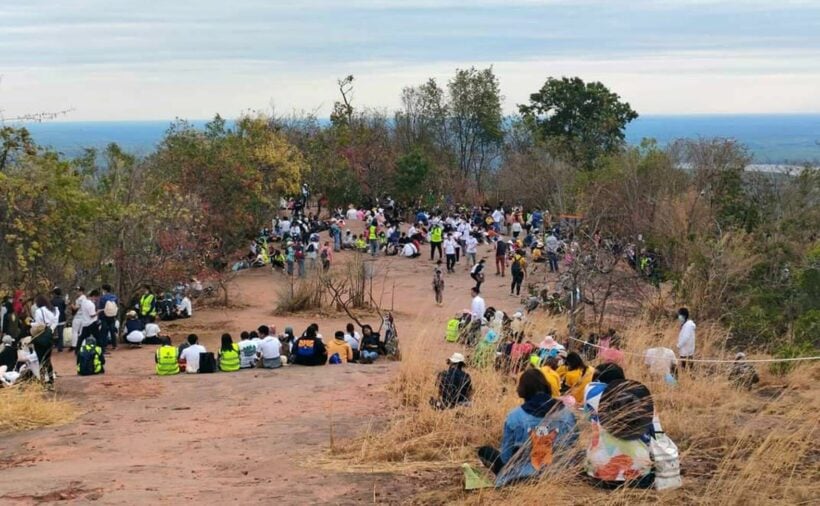 Hundreds of Thai tourists were stuck on the mountain after visiting the Naga Cave at Phu Langka National Park in Bueng Kan province on Saturday. The cave is known for a giant rock with scale-like marking and a shape that looks like the mystical serpent, Naga. Thai people believe that this is a sacred spot to wish for good luck, especially the lucky numbers for the lottery.

But on Saturday the 5th, a date considered by many Thais to be so sacred and powerful that wishes can come true, so many people visited the Naga Cave that many were stuck on the mountain waiting to get down. The visitors were over the limit and many complained to the provincial authorities.

A Thai reporter visited the spot on the crowded day and says that people were still gradually coming down at 9pm. One visitor shared via the interview that they travelled up to Naga Cave at 7:30am, started walking down at 3pm, but just reached the ground at almost 9pm. Reports in Thai media also say that more than 500 visitors were at the cave at night, while the tour guide says it was around a thousand.

Many tourists said there was no visitor limit and had only one path to walk, which was a problem as many of the visitors were elderly. They also complained and told the provincial governor to solve this problem. Bueng Kan provincial governor Sanit Kaosa-ard informed Thai media that he had already asked the Phu Langka National Park leader to reorganize to avoid the same situation. After this, there will be a meeting with different departments to find a better solution.

The Minister of Natural Resources and Environment, Varawut Silpa-archa, says that the national park actually has a visitor limit, park officials will check how authorities managed the situation.