In the shadows of the first-quarter buzzer, Jordan Rapana landed a high shot on Jesse Ramien just as the Indigenous All Stars were looking to cross over for their second try.

Rapana’s high shot, now the second incident he’s been placed on report in the match, led to a scuffle that nearly spilled over into the stands.

Referee Adam Gee placed Rapana, along with Andrew Fifita, in the sin bin.

“It’s hard to make a conventional tackle there,” said Billy Slater in commentary for Nine.

“It’s hard to go in with your left shoulder and wrap your arms because you’ve got another teammate involved, it’s high-speed and you have a duty to defend your line.

“You also have a duty of care not to hit the opposing player in the head, which I don’t think Jordan Rapana did on that occasion.”

The Indigenous All Stars lead 6-0 at the end of the first quarter. 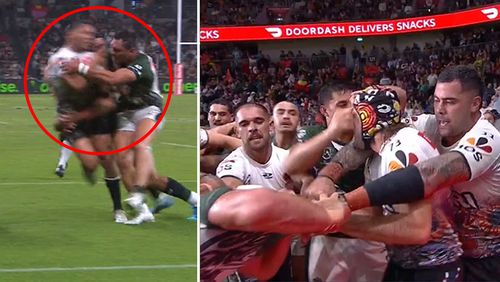