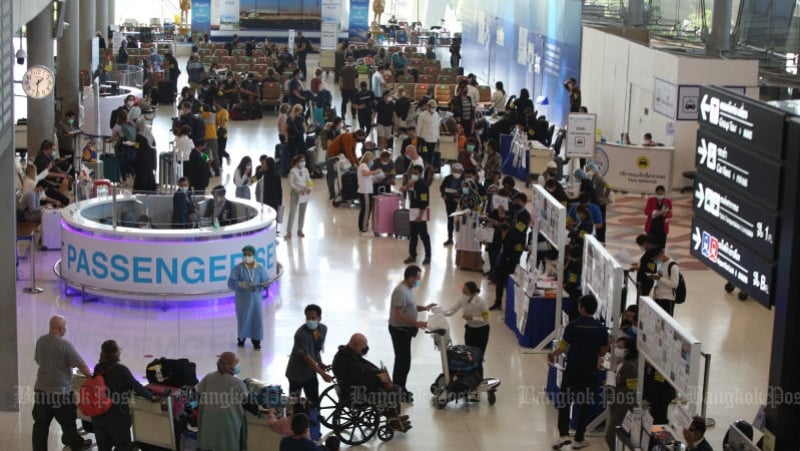 BANGKOK: With more than 465,000 tourists expected at Suvarnabhumi airport between Jan 26 and Feb 7, during the Chinese New Year festivities, the government says it is fully prepared for the resumption of the Test & Go scheme this Tuesday (Feb 1).

Mr Kittipong said that 10 airlines have already requested 50 extra flights between them over the period.

The top three carriers offering the most special flights during the period are Bangkok Airways with 14 flights, Myanmar Airways (eight) and T’Way Airlines, the South Korean low-cost carrier, (eight), he said.

This year, the Chinese New Year holiday will take place between Sunday and Tuesday.

Meanwhile, government spokesman Thanakorn Wangboonkongchana revealed yesterday that Prime Minister Prayut Chan-o-cha had expressed confidence that Thailand is fully prepared to welcome back tourists under the Test & Go scheme which will resume on Feb 1.

This will help the tourism sector bounce back after the scheme was suspended following the outbreak of the Omicron variant, the spokesman quoted the PM as saying.

He said Thailand’s public health system is sufficiently equipped to deal with the situation after the resumption of the scheme and at least 8 million tourists are expected to arrive throughout the year, generating some B480 billion in income.

The group thanked the government for its decision to resume the Test & Go programme and urged it to speed up efforts to resuscitate the tourism sector, Ms Traisulee said.

One proposal involves the exemption of value-added tax for hospitels (hospital-cum-hotels) as an incentive for operators and to reduce their financial burdens. Mr Anutin pledged to submit the proposals for consideration by the prime minister and the Cabinet, Ms Traisulee said.

She went on to announce that the government is considering measures to reopen the country, although there would still be a need to follow virus prevention protocols.

The Test & Go programme for international visitors resumes on Tuesday with a number of extra measures in place, including another RT-PCR test on the fifth day after travellers enter Thailand.

The scheme was suspended earlier this month in response to growing concerns about the Omicron variant of COVID-19.

Under the programme, overseas visitors must spend one night in a certified hotel while they wait for the result of their first RT-PCR test taken on arrival.

Those who test negative for COVID-19 are then allowed to leave and explore the rest of the country.

When Test & Go resumes on Feb 1, travellers will be required to take two tests, one on the first day and then another on the fifth day.