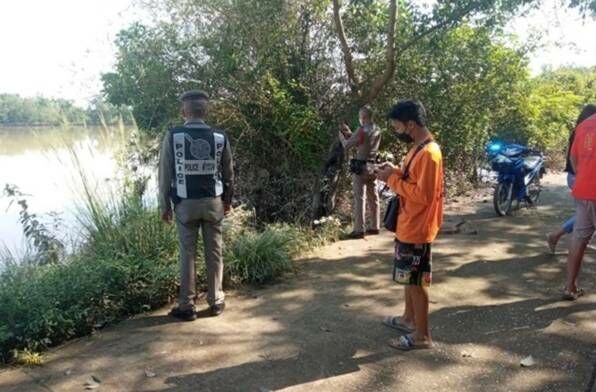 More details are emerging on the Thai pregnant woman who was found dead in a pond in the eastern Rayong province on Tuesday.

Police revealed that the woman, 19 year old Kritsana’s panties were missing. They also found that the grey trousers she was wearing were on backwards. She had on a yellow shirt. Investigators also found a pair of shoes next to her body. Kritsana had a green rope tied around her neck, which had wounds on it. Police initially suspected that she had been raped and murdered.

Investigators had initially estimated that Kritsana had been dead for three days. But Kritsana’s husband said that he had video chatted with her the day before she was found dead.

Kritsana’s husband, 22 year old Peerapong, told police that his wife sometimes stayed over at a friend’s house, and she had planned to return to his mother’s house, where they both lived, the next day.

Peerapong said that Kritsana used to work at a karaoke bar, but she had given up that lifestyle when she married him two years ago. He said she appeared happy, and there was no sign she was involved in any trouble.

But Peerapong told investigators that it had been made known to him that, on the morning of the day she was found dead, an unknown Cambodian man had picked Kritsana up early in the morning.

Police are continuing to investigate.

A young pregnant Thai woman was found dead in a pond in Thailand’s eastern Rayong province on Tuesday. Early reports reveal that she might have been strangled. In an initial examination, Klaeng district police found that the woman, 19 year old Kritsana, had wounds on her lips and neck as well as traces of being strangled.

Kritsana had been living with her husband in a rented house about 3 kilometres away from where she was found. Kritsana’s husband told police during questioning that his wife was five months pregnant.

Peerapong added that he and Kritsana rarely stayed together because of work. He also noted that she was a pliable person and often deceived by others.

Police are continuing to investigate the incident with a forensic team. They are also checking CCTV footage and questioning witnesses. The Pattaya News reported that police appeared to verify that Peerapong was not in Rayong at the time of the incident.