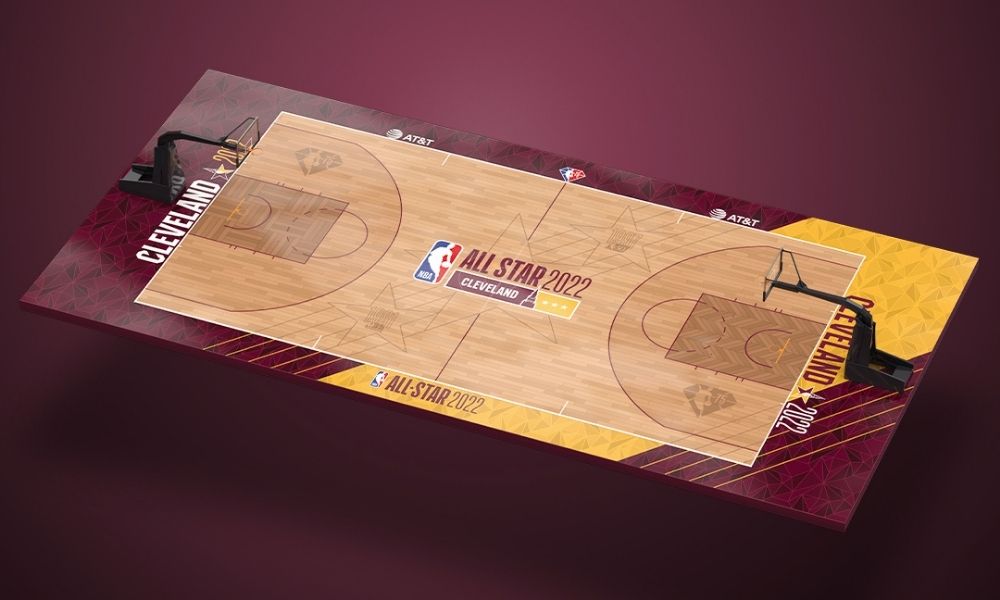 The National Basketball Association (NBA) has revealed the court design for the All-Star Game in Cleveland next weekend and detailed a series of non-fungible tokens (NFT) that will celebrate the city’s association with the league and its major milestones.

The 71st NBA All-Star Game will be held at the Rocket Mortgage FieldHouse, home of the Cleveland Cavaliers, on 20th February and will serve as one of the main celebrations of the league’s 75th diamond anniversary.

The annual exhibition game pits the best players from the league’s Eastern and Western conferences against each other and the NBA designs a unique court for the weekend. This year’s court features the yellow and wine colours of the Cavaliers, along with diamond patterns to commemorate the anniversary, and three shooting stars to mark the three All-Star Games held in the Ohio city.

Cleveland has also previously hosted the 1981 and 1997 All-Star Games during the league’s 35th and 50th anniversaries. The showpiece was also held in another Ohio city, Cincinnati, in 1966.

The league’s NFT drop will include digital representations of the special courts used at all three of those games, and at the 2022 All-Star Game.

Each NFT will display the court as part of NBA All-Star artwork covering ten Cleveland locations and will be available in three versions – an original edition, an ‘NBA Edition’ and a ‘Diamond Edition’, which will also include a physical mini replica of the court.

Anyone interested in purchasing one of the tokens can find out information by scanning QR codes located around key locations in the city, including the Rocket Mortgage FieldHouse venue, as part of a ‘city-wide’ shoppable gallery.

The league says US$100,000 of the proceeds generated by the drop will be donated to charitable organisations and government agencies helping the local community cope with the economic and social impacts of Covid-19.

The NBA has been one of the more progressive sports organisations when it comes to technological innovation and has established itself as an early leader in the NFT space. NBA Top Shot offers basketball fans the opportunity to buy and sell NFT collectibles of moments in the league’s history, with blockchain’s distributed ledger technology used to authenticate each individual token. The venture with Dapper Labs has been successful, with the Top Shot marketplace witnessing transactions worth more than US$780 million.