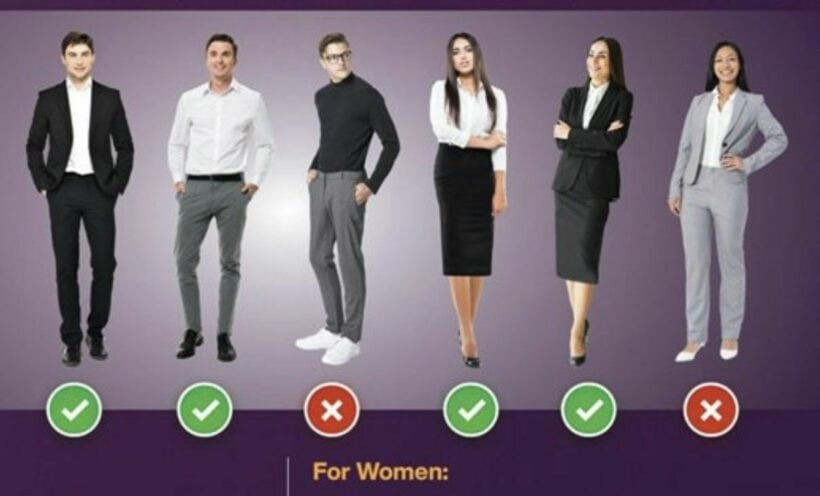 Dress code details for an upcoming scientific event in Bangkok has the internet in a cosmic quandary. International physicists are finding themselves scratching their head over the obscure dress code requirements for the event’s opening day that harken back to the 1950s.

The 13th International Particle Accelerator Conference is being held at the Impact exhibition and convention centre on the north side of Bangkok. Over 1,000 delegates and 70 industry exhibits are expected to be at this event.

But the scientific minds are being distracted from matters of particle acceleration and quantum physics to dressing “appropriately” for the event. The dress code infographic has been issued due to the attendance of HRH Princess Maha Chakri Sirindhorn who is opening the event and attending the first two plenary sessions.

The organisers have since removed the outmoded dress requirements saying that it will be ‘refined’ before the event. The events website also provided guidelines for interacting with a member of the Thai Royal Family and how to address Her Royal Highness.

The details for the women were twice as long as for the men with the key word ‘conservative’ and ’no pants allowed’. ‘No tattoos and only pale coloured nail polish’. Skirts were ‘a little below the knee’ and blouses ‘preferably white’.

As for men, Steve Jobs would have been banned from attending the opening day as black skivvies and while sports shoes are verboten! But at least the jackets were ‘optional’ given Bangkok’s heat.

Professor David K. Smith tweeted that the attendees “are creative academics. We go to conferences to share ideas”.

“As long as people aren’t wearing bikinis or speedos and don’t have swastika tattoos on the side of their face, I really couldn’t care less what they look like.”

“Lots of people asking if it is for real. Yes, it’s the dress code for the opening session attended by a member of Thai Royal Family.”

“The detailed dress code was preliminary and will be adapted – presumably to simply request ‘professional business’ attire or possibly ‘smart casual’ for the Royal Family session. I think that’s right response.”

“Regarding the concerns over the dress code requirements for the IPAC 22 opening ceremony published on the IPAC 22 website, we, the IPAC 22 organizers, would like to express our gratitude for all the valuable feedbacks. #IPAC22 #IPAC2022.”

Netizens have rushed off to the archives finding numerous occasions when people have been meeting Thai royalty in contravention to the conference’s published dress code.

This meeting between then US President Obama and Secretary of State Hillary Clinton with the King Bhumibol Adulyadej showed her both wearing pants AND not in ‘neutral colours’.

The event kicks off on June 13, we predict with a modified dress code. We look forward to seeing the same sort of dress code imposed for the next Star Trek convention in Bangkok.

“A photon checks into a hotel, where a bellhop asks where its suitcase is. The photon replies, “I didn’t bring any luggage. I’m traveling light.”