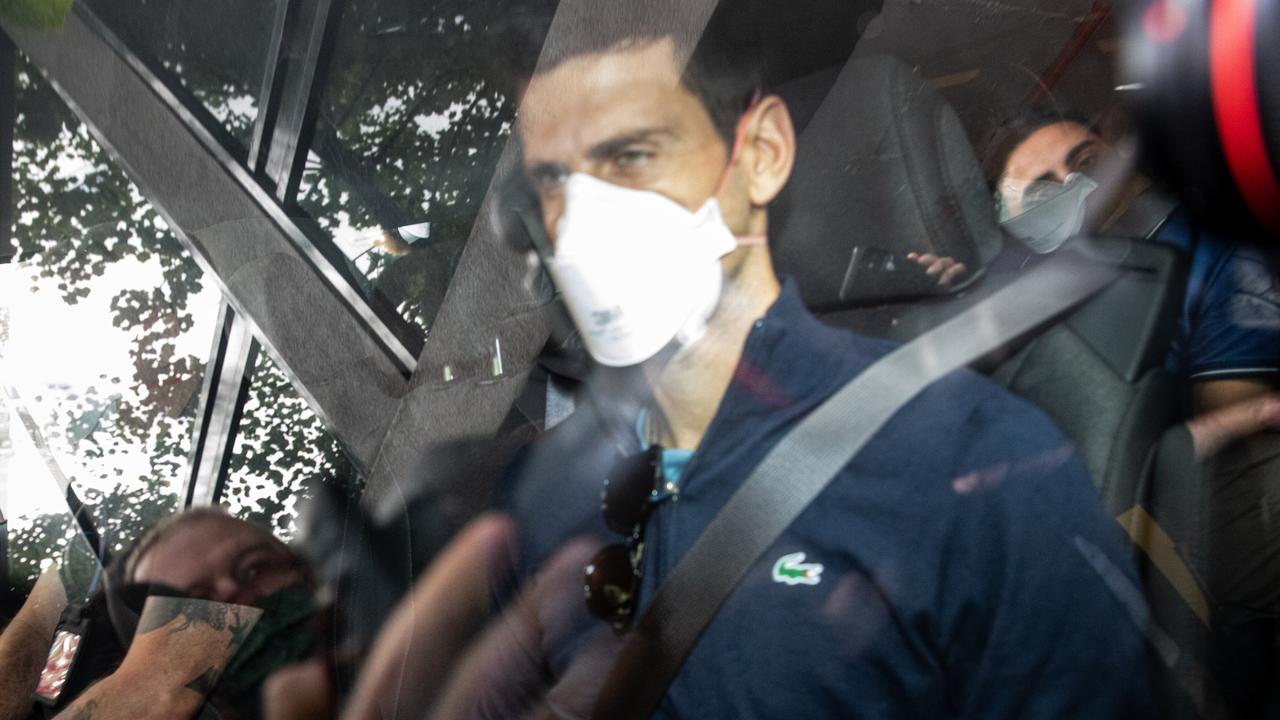 Novak Djokovic is back in court this morning and will finally learn his deportation fate with a Federal Court hearing to decide whether he stays or goes. FOLLOW LIVE.

Novak Djokovic has left the ‘horror hotel’ detention facility and been escorted to his lawyer’s offices ahead of the final court hearing in the never-ending visa fiasco.

Having once failed to remove the unvaccinated 34-year-old from the country, the Australian Government is trying again.

And Djokovic is fighting back, with a new federal court appeal underway in Melbourne.

Very much in Djokovic’s corner is Nick Kyrgios who has slammed the handling of the fiasco.

“We’re treating him like he’s a weapon of mass destruction at the moment,” he said. “Literally he is here to play tennis.

“The mistreating of the people of Melbourne over the past two years has been atrocious, and I understand the anger towards him being unvaccinated and the medical exemption, I understand that. Now I feel like the people, no matter what Novak does, they’re just going to say ‘get him out of our country’.

“The media has borderline ruined the Australian Open, divided everyone and it’s not what sport’s supposed to do.”

This story will automatically refresh every 60 seconds
(all times AEDT)

9:55am DJOKER ARGUMENT
Djokovic lawyers are currently arguing whether or not the Court can consider Hawke’s reasons to deport – basically that if the Serb remains in the country it could incite anti vax sentiment claiming that deporting him could bring about a similar response.
“That in itself might be apt to generate anti-vax sentiment.”
The statute didn’t require Hawke to provide reasons for his decision.
But having done so Djokovic’s lawyers are arguing the case law is clear that the court can use them to decide if Hawke acted lawfully.

9:43am STOP INTERRUPTING
“Court would be grateful if we can complete this in due time. We should be able to complete this argument by lunchtime.”

We would all be grateful if we can get this done by lunch yeah. I like this judge.
And the lawyers juts got a bit of a telling off for interrupting the judge – for a third time.

9:36am WE ARE UNDERWAY
Currently just outlining why we are here and what we are hoping to achieve.
“not the least of which the minister himself [said]…matters involved in the controversy go to the very preservation of life and health in the community.”
Chief Justice James Allsop opened the hearing by declaring it is “important to resolve this controversy as soon as possible”.

8:58am DJOKER ON THE MOVE
In the last few minutes, Djokovic has been photographed leaving the horror hotel to make his way to his lawyer’s office in order to watch the court hearing.
We are about 30 minutes from things getting started.
Joining me this morning are James Campbell and Anneka Simonis who will be translating the court hearing as it goes.
Word from our reporter at the hotel, Laura Placella: Novak Djokovic has returned to his lawyers’ office on Collins St after departing the notorious Park Hotel around 8.30am.The tennis champ could be seen sporting a Lacoste sweater and blue jeans as he left the detention facility, having changed out of the green tracksuit set he arrived in on Saturday.

8:43am WHAT HAPPENS TODAY?
The court’s format — a panel of three justices — leaves little room to appeal any decision.

Scott Morrison’s government has tried and failed to remove Djokovic once before — on the grounds he was unvaccinated and that a recent Covid infection was not sufficient for a medical exemption.

A lower circuit judge ruled that officials made procedural errors in that decision.

For a few days, Djokovic was free to train before a second visa revocation and a return to a notorious Melbourne immigration detention facility.
Djokovic’s high-powered legal team are expected to kick off proceedings, arguing his detention and his deportation are “illogical,” “irrational” and “unreasonable.” If the 34-year-old loses, he will face immediate deportation and a three-year ban from Australia — dramatically shortening his odds of winning a championship he has bagged nine times before.

If he wins, it sets the stage for an audacious title tilt and will deal another humiliating blow to Australia’s embattled prime minister ahead of elections expected in May.

8:40am D-DAY IS HERE
Good morning and welcome to what feels like day 1043 of the Djokovic fiasco. With any luck today is it. End. Finito. Terminato (not even sure that’s a real language word) but you get my drift. This needs to end. We need to talk about backhands, lobs, smashes and how many racquets Nick Kyrgios is smashing.

We will be following the court hearing live, translating the jargon that seems to make time stand still, and bring it to you in snippets.