The Tigers have extended their lead and no one saw this coming.

A perfect chip kick from Jackson Hastings finds the chest of David Nofoaluma who scores his second.

Hastings had been switched to halfback, and Luke Brooks pushed to five-eighth ahead of this game.

“Where has this been?” commentator Dan Ginnane said.

“Half an hour ago Michael Maguire was going to be sacked, now he’s a genius.”

Michael Ennis told Fox League the Hastings-Brooks switch has worked brilliantly in the first half. 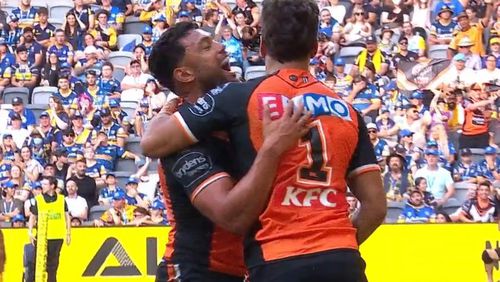