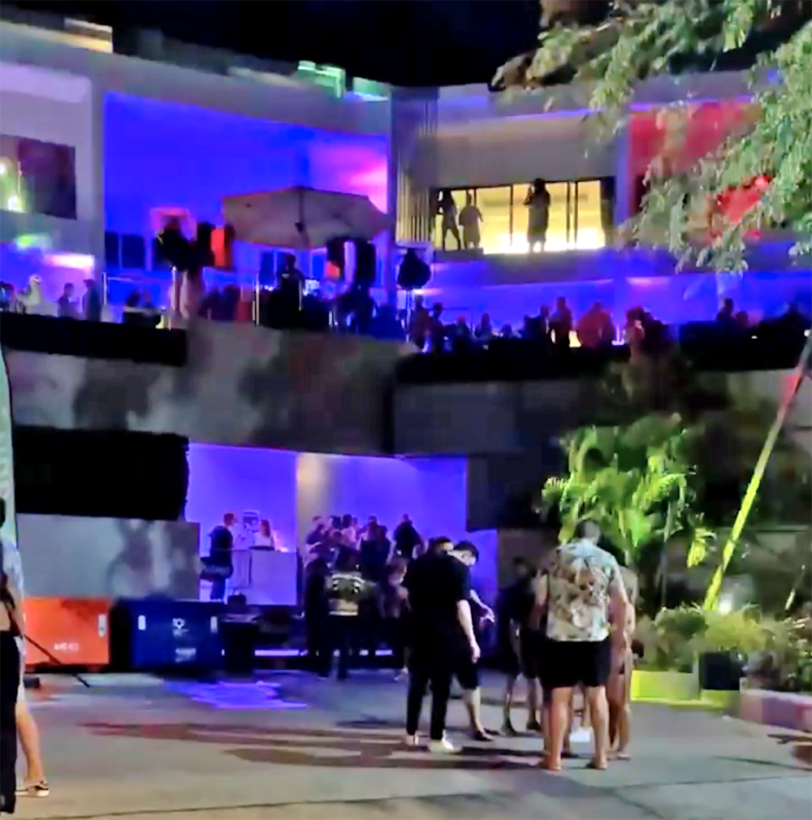 Five senior police officers at the Patong police station have been sidelined to ‘office duties’ at the provincial HQ after a video surfaced showing a popular hotel open way past the current curfew time in Phuket.

The 11pm curfew in Phuket has been broadly ignored by the town’s nightlife which is battling to restart after nearly 2 year Covid hiatus. It’s now been alleged that Police in Patong have, at times, turned a blind eye to the curfew and visitors have been enjoying the ‘extended’ hours.

Now a 3 minute video clip has surfaced of a party, well past the ‘closing time’, at Patong’s ‘secret party venue’, the Patong Bay Hill Resort Hotel.

You can watch lawyer Sittra Biabangkerd’s video HERE. The video has already had 0ver 300,000 views and 2,100 comments, all in Thai language as far as we can see.

Pol Lt Gen Surachate Hakparn, aka. Big Joke, and now operating as Thailand’s assistant national police chief, reported that 5 senior police at the Patong police station would now be moved to desk jobs at the provincial HQ whilst a full investigation continues into the hotel’s alleged violations and the senior police that, allegedly, allowed it to continue.

The police sidelined include the Patong station police and senior deputies.

Yesterday the lawyer said he had received complaints from Phuket residents about the Patong Bay Hill Resort Hotel opening beyond the legal closing time, allegedly annoying local resident “with excessive noise”, according to Bangkok Post.

“Entertainment venues (at the hotel) have been operating over legal hours for years, loud noises, annoyance and illegal things for years and the officials are still silent.”

“I decided to see the place with my own eyes and it turned out that this entertainment venue is actually open until morning with a lot of people gathering there”.

Mr Sittra claims he had alerted local police about the issue many times “but no action was taken”.

So he headed up to the well known party venue, overlooking Patong, to see for himself the situation and record some video showing that the Patong Bay Hotel “operated throughout the night until daybreak”, according to his Facebook posting.

“I think it is not possible for entertainment outlets in the hotel to have operated beyond the allowed opening hours, catering to about 1,000 clients per day, without the knowledge of the authorities.”

“Large bribes may have been paid.”

Sittra asked why the Phuket police chief had (allegedly) failed to enforce the law and “turned a blind eye to violation of current rules regarding Covid-19 regulations and opening hours”.

In a somewhat ironic twist, some 50 staff from the hotel then protested along Bangla Road in Patong last night to rally against the shooting and posting of the video, and to demand a change to the current opening hours.

Placards read… “We are hungry” and “We don’t want to go jobless”, the protest taking place around the current 11pm closing time which has not been rigidly enforced over recent months.

The hotel responded by claiming that the lawyer had shot the video without any permission. They claimed that the exposure of the video could harm the prospects for hotel staff.

Today Sittra Biabangkerd responded to the late night protest on Bangla Road by maintaining that he “worked for people who had no one to turn to on the violation of the provincial orders”.