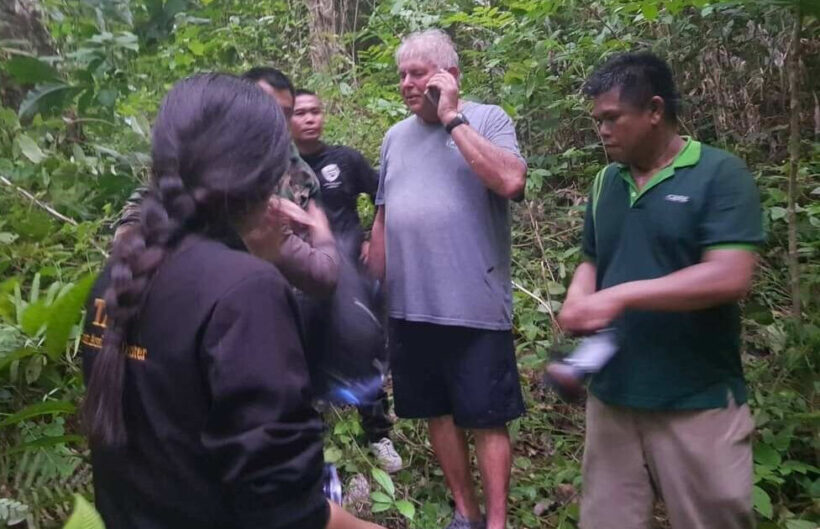 Phuket Tourist Police and national park officers have rescued an American tourist who got lost in a jungle in Thalang district yesterday in central Phuket. The tourist, an unnamed 68 year old man, had become lost in the afternoon, but the team luckily found him in the early evening. He reportedly had some scratches on his leg, and was dehydrated, but otherwise was OK.

Emergency responders provided the man with water, and then guided him out of the forest to his accommodation.

The man had contacted Phuket Tourist Police when he got lost, and they started searching for the man along a nature trail on a hill with the help of officers from a nearby national park. The park officers reportedly knew the area very well, and the police used GPS to search along the trail.

“I’m very glad to meet you guys, I didn’t know what to do after I got lost and spent hours wandering with limited supplies and water…”

Phuket still has some large and heavily forested areas, particularly north of the central, and north east areas of the island.

Another foreigner became lost in a forest in Thailand last month. The man, a 72 year old French expat with Alzheimer’s disease, went missing in a Chiang Mai forest. He had driven to submit documents to the French consulate, and got lost on his way home when he could not remember the way back from the consulate. His family alerted police after they couldn’t contact him, and a team of 200 police officers and local district leaders searched for him. They then found the man at a hilltop temple.