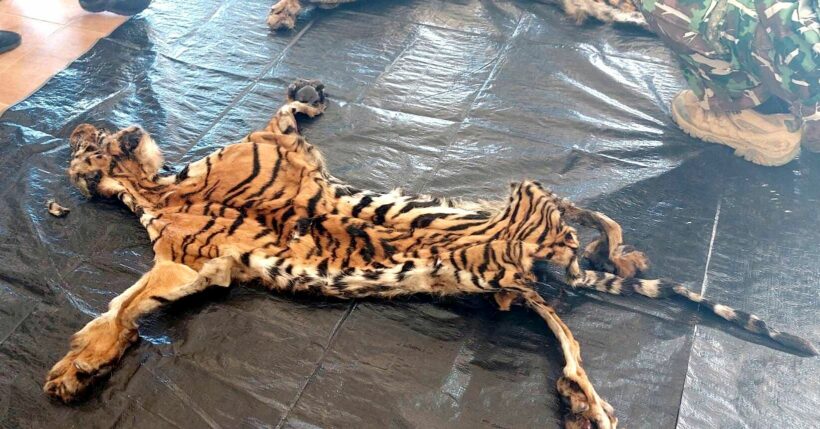 After the shocking discovering of a camp in Kanchanaburi’s Thong Pha Phum National Park barbequing tiger meat while drying the pelts of 2 slain tigers, police have now taken into custody the fifth and final suspect in the investigation. The man was arrested last night and denies taking any part in the killing, skinning, or cooking of the tigers, which are a protected species in Thailand.

When park rangers first approached the camp on January 9, dogs on site barked giving the 5 men camping there warning to jump up and flee into the woods where authorities were unable to locate them. After the story went viral, 4 of the suspects at the campsite voluntarily turned themselves in.

The final suspect, a 66 year old man from a local village in Pilok sub-district, was arrested last night and brought to the local Thong Pha Phum Police Station when he joined the other 4 suspects. All 5 claim that they are not hunters, but merely ranchers raising cattle and had killed the tigers after the big cats had killed around 20 cows from their farm and neighbouring farms.

The assertion that they are not hunters did not impress one senior official, as the Deputy Director-General of the Department of National Parks, Wildlife and Plant Conservation expressed disbelief in the claim that the killing of the 2 tigers was only to protect their cattle.

He points to the way in which the tigers were killed and how their bodies were handled after their death as evidence. A rancher would shoot the tiger in whatever way they could, then dispose of the carcass. But these tigers were hunted skillfully with precise headshots that did as little damage as possible to the skin. Those skins were then meticulously and professionally removed with great skill, again doing as little damage as possible to the pelt.

The skin of a tiger in perfect condition like that can fetch as much as 1 million baht on the black market, which the Deputy Director-General suspects is the true motivation behind the killings. Still, they will wait for a full investigation to be completed and to see if the 5 suspects can be linked to any know illegal wildlife hunters or traders in the area.