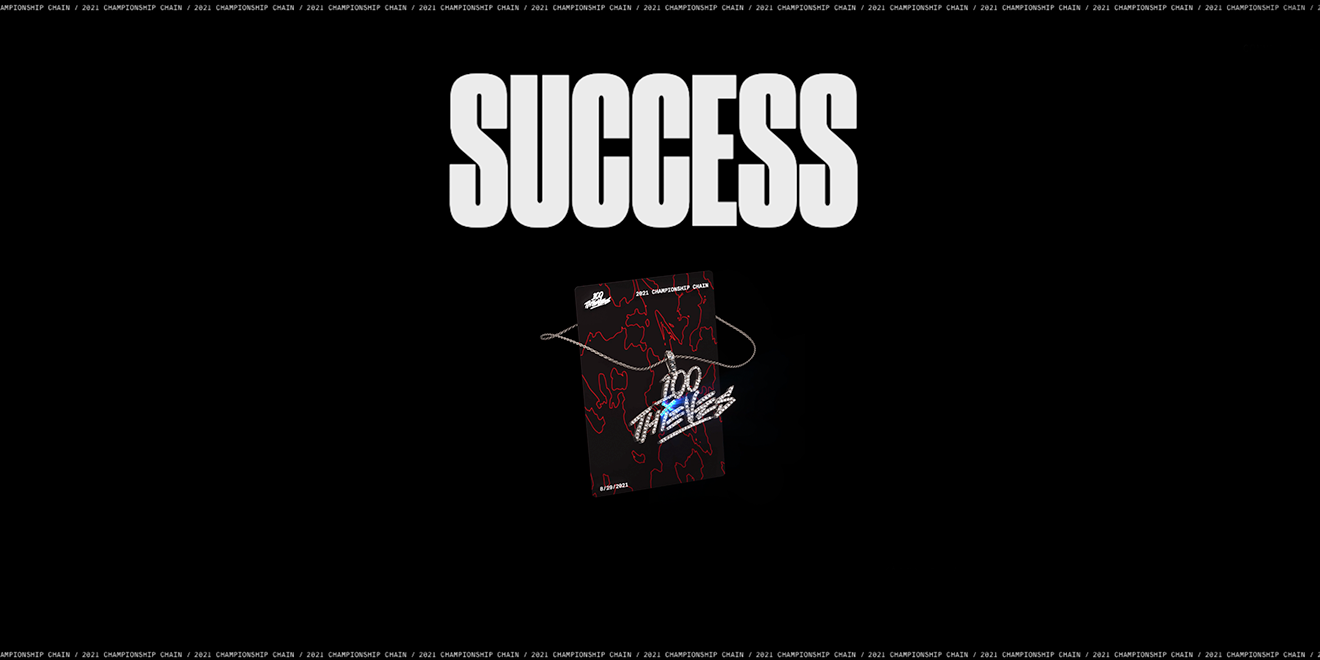 Through a most cunning experiment, on February 2nd, 100 Thieves weaved its 2021 LCS esports victory story into a display of the business’s innovation. In the LA organisation’s signature parasocial content fashion, 100 Thieves CEO Matthew ‘Nadeshot’ Haag appeared in a video introducing the org’s 1.1 million Twitter followers to a masterful 75-hour click-and-collect fan giveaway.

The campaign’s messaging was transparent: devoid of buzzwords, overly technical jargon, or compromise to its purpose. Its flex, on the other hand, was hidden in plain sight. The ‘hoodie org’ just invited its entire fanbase to onboard for a free, entry-level, blockchain-powered experience — and made it look enviously easy.

The digital collectible promotion was a far cry from the typical standards of crypto-community collections: not capped at 10,000, not procedurally generated, the org covered all transaction fees, and not intended for resale. The antithesis of the normalised use case for NFT technology.

This flouting of convention acknowledged the dichotomy between two main audiences: the NFT-enthused crypto crowd and the digital product-native gaming audience. What’s attractive to one side of the aisle is rage fuel for the other, detailed in the gaming industry’s short-yet-storied attempts to integrate blockchain technology into its ecosystems.

No exclusivity hype, no celebrity endorsements, no anthropomorphised animal avatars.

When Haag directly explained the digital collectible and its process, he came equipped with airtight messaging, meticulously crafted to speak to the community. Any mention of the common abbreviation for non-fungible token was noticeably vacant in the communication, leaving no opportunity for knee-jerk NFT-vitriol to overtake the gesture to the community.

In the lead up to the launch, the team hoped that the promotion might hit 100,000 total claims, and even that was a stretch goal. The 100 Thieves 2021 Championship Chain digital collectible had over 300,000 owners in the first 24 hours, totalling 705,405 owners by the end of the giveaway on February 5th.

Haag’s call-to-action converted viewers to a minimal, silky-smooth onboarding process that made claiming the 2021 Championship Chain digital collectible as fluid as signing up for a newsletter. And that was that.

A few clicks and an email address later and a first-time user was now the proud owner of their first crypto wallet housing a commemorative, rotating, virtual artefact of esports history. The org confirmed that newly created wallets made up a significant portion of the collectible’s ownership.

The first-of-its-kind, made-for-mainstream, ease-of-use solution was developed specifically for this use case. Unbeknownst to many, 100 Thieves pulled off an incredible feat: not only getting gamers to claim something they’ve been conditioned to reject over the past year, but making the conversion process so incredibly elegant.

“We had a singular focus — share our championship with the community that supported us along the way,” 100 Thieves’ Director of Digital, Brandon Saw, told Esports Insider. “When we build with that goal solely in mind, we end up with a fundamentally different product and structure from the speculative NFTs that have become so prevalent.”

While the necklace is technically a non-fungible token, powered by second-layer blockchain solution Polygon, this detail was minimised to irrelevance for the goal of the promotion. Clever technical intricacies made fan ownership of the digital asset possible, but that wasn’t the point.

The point was to give something of 100 Thieves-level-of-cool to fans for their enjoyment. Something that recognises achievement and promotes the org’s season debut in the LCS. Something that the fans felt they were a part of, because they could own that something.

The team took what they learned from last spring’s Enter Infinity apparel range and NFT experiment. Namely, that a large portion of the community didn’t have a crypto wallet and Ethereum’s prohibitive wait-times, clunky onboarding, and high price of transactions restricted community participation.

100 Thieves could have just dropped a free commemorative edition desktop and homescreen wallpaper, or limited edition socks, or special live stream — but, those would all fail to deliver on the 100 Thieves brand’s pursuit of the cutting edge of culture.

That edge is found by pushing innovation and possibilities forward and not shying away from risks, Julia Wu, Director of Marketing at 100 Thieves said. She and the rest of the team want the org to be innovative everywhere: in digital, in experiences, in content, in products. “This project was just one of the many things we’re trying to do this year,” she said.

The 2017 LCS franchise slot purchase was 100 Thieves’ maiden entry in esports. In 2018, the quest for victory was captured by the org’s hit YouTube docuseries, The Heist, allowing fans of the team to follow along with the org’s hit-and-miss years leading up to the team’s 2021 regional league victory, and thus the series’ finale.

“[The LCS team] was our very first team and the team that we have invested so much in,” Wu said. “It took 4 years to get that trophy and winning the championship felt so good, so we knew we always wanted to make this moment really big and celebrate the team, the community, and everyone’s hard work.”

The championship was meaningful for more than the brand’s narrative; it rang home on personal levels for so many members of the organisation and the fans, said Wu. Converting the physical diamond-encrusted necklace — earned by the championship roster — into a digital object that the community could own was a perfect synergy between the org’s departments. Ultimately made possible by 100 Thieves’ technical prowess and the application of Polygon’s technical capabilities.

The digital necklace is not the end-all-be-all of the team’s technology strategy; if anything, it was a proof-of-concept. The positive reception came as an indication that deeply-considered, well-communicated and authentic attempts can be genuinely well-received. It showed how adaptable the community is to experimentation.

The LA-based organisation isn’t looking to promise anything further in the crypto or NFT space following the success, and any 100 Thieves metaverse play is still far-and-away, Saw said.

“We’re really happy with how this one went, but we’ll take things one step at a time,” he said. “As long as we can do things that our community can always tell is authentic then we’re happy to do that, but we’re never going to sprint at something because an opportunity is really shiny.”

It’s only February and the LCS just kicked off, but the five-year-old organisation’s prospects, on-and-off the rift, look to be glinting from polish.