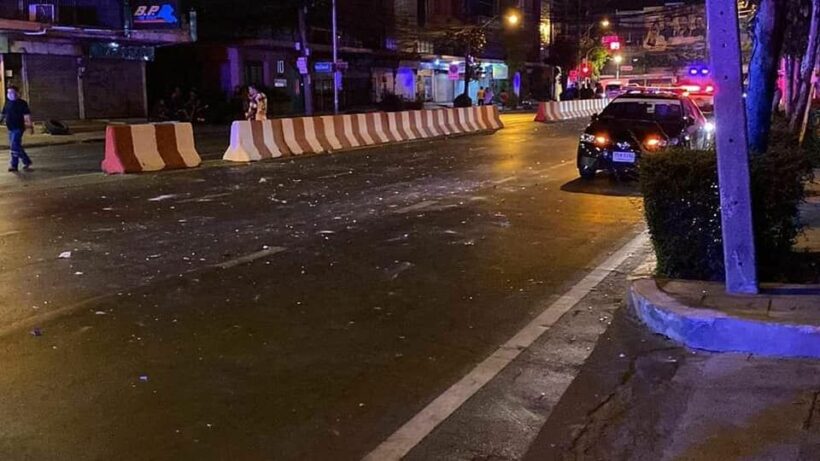 A volunteer rescue worker has died, after reportedly receiving a lethal gunshot wound to the chest during a street brawl that broke out between two rival volunteer foundations on Sunday in Bangkok.

Officers from Thonglor Police Station investigated Kasam Rat Road in front of Lotus’s Rama 4 branch in Bangkok yesterday, after receiving a report of a fight between two volunteer rescue teams — Poh Teck Tung Foundation and Siam Ruam Jai Foundation. One rescue worker was reported to be shot at the scene and he later died at a hospital.

According to the report on Khaosod, the scene of the fight was a six lane road, which was full of bricks and shattered bottle glass after the fight between volunteers from the two foundations. At a barrier in the middle of the street, the officers found a rescuer from Poh Teck Tung Foundation who was shot in the chest and lay there in a severe condition. The victim was sent to a nearby hospital, but he could not make it.

The other four rescuers from Poh Teck Tung Foundation were also sent to the hospital, having sustained injuries from bricks and glass bottles.

More than 50 Poh Teck Tung volunteers were reportedly still at the scene when police arrived, but Siam Ruam Jai members had already fled. The Poh Teck Tung team leader, Somboon Kwan-aum, later shared in an interview with Thai media that they were fighting over work boundaries in the Thonglor area. He said some of the opponents were his old colleagues who were allegedly fired before February this year for establishing themselves as influential people who gained too many benefits from working as rescuers.

Among the 70 officers who were reportedly fired, Somboon said some of them had joined the rival Siam Ruam Jai Foundation and opened a new rescue station at the same boundary. They’d had minor conflicts several times before the deadly brawl broke out.

The team leader said Poh Teck Tung Foundation at the Thonglor rescue station had received fake accident reports four times via their hotline. His team found the Siam Ruam Jai team at the spot reported on the phone in the 4th call, so they went to ask them for more details because they couldn’t find any accidents there. After that, they argued, and it escalated into a brawl.

The Poh Teck Tung team insisted that they were attacked first with bricks, glass bottles and guns. They said they would like to apologise to the residents for what had happened that night and for blocking the traffic. The team also said they wanted the gunman from Siam Ruam Jai Foundation to surrender to the police as soon as possible.