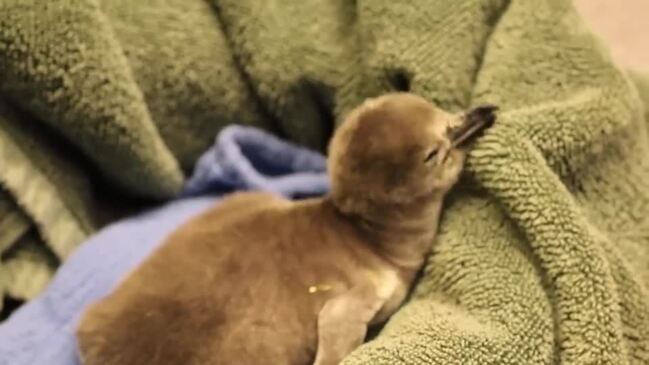 The Rosamond Gifford Zoo in Syracuse, New York, welcomed the arrival of the first chick to hatch from an egg cared for by a pair of same-sex penguins in their colony on January 1. Elmer and Lima, the two adult male Humboldt penguins caring for the newborn, formed a bond during the current breeding season and became the first same-sex foster couple at the zoo, the zoo said in a press release. The couple was given a chance to incubate an egg containing a viable embryo, and they have continued to brood and feed the chick since it hatched. “Elmer and Lima took turns incubating the egg and have been doing a wonderful job warming and feeding the chick,” the zoo said on Facebook. Several other institutions have had same-sex pairs of penguins successfully foster eggs in recent years, according to the zoo. Footage filmed by the Rosamond Gifford Zoo on January 6 and January 24 shows the newborn chick at six days old and 24 days old, respectively. The zoo added that “Elmer is so named because the egg he hatched from was accidentally damaged by his parents and the animal care team repaired it using Elmer’s glue!” Credit: Rosamond Gifford Zoo via Storyful