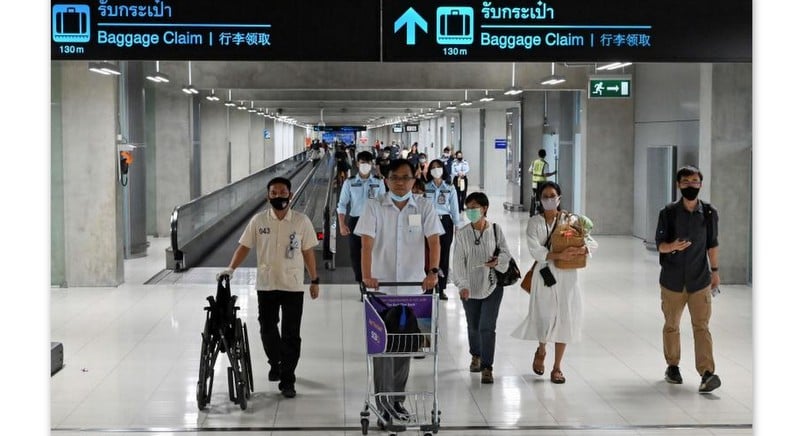 BANGKOK: The government is expected to revise its list of “Test & Go” countries following the spread of the Omicron variant of COVID-19 as details yesterday (Dec 20) emerged of the country’s earliest recorded local case of the strain.

International passengers arriving at Suvarnabhumi airport amid concerns that the ‘Test & Go’ programme for those entering the kingdom could be scrapped because of the rising number of Omicron variant cases. Photo: AFP

Gen Supoj Malaniyom, chief of the Centre for COVID-19 Situation Administration’s (CCSA) operations base, said the list of of low-risk countries eligible for the tourism opening scheme will be reviewed and COVID-19 screening measures will be intensified.

Gen Supoj said the CCSA’s operation centre will identify “high-risk” countries before holding a meeting on Friday to decide on the extent to which the “Test & Go” scheme may need to be revised. If the risk of further infections is considered high, the scheme may be suspended completely, reports the Bangkok Post.

“We’re monitoring the spread of Omicron in other countries, not just the UK. The situation is alarming and we must take necessary precautions,” he said.

The entry programme, which started in November, applies to fully vaccinated visitors from specific countries in an attempt to revive the tourism and service industry.

“We have to be more stringent [with the “Test & Go” scheme] and COVID-19 screening of travellers,” said Gen Supoj.

His remarks came after the Public Health Ministry said it would back suspending the programme and requiring even fully vaccinated arrivals to spend time in sandbox and state quarantine schemes.

Deputy Prime Minister and Public Health Minister Anutin Charnvirakul said the ministry forwarded the proposal to the CCSA for consideration after more Omicron cases were detected.

Dr Chakkarat Pitayawong-anant, director for epidemiology at the Department of Disease Control, yesterday confirmed the local transmission of the Omicron variant.

A 49-year-old-Thai woman contracted the virus from her husband, a Colombian pilot who arrived from Nigeria and entered the country via the sandbox programme on Nov 26.

The man, who had received two shots of the AstraZeneca vaccine prior to entry, tested negative for COVID-19 upon arrival and received a booster shot of the Pfizer vaccine on Dec 1.

However, he spent the 4th to the 6th of December suffering from a fever, tiredness and a sore throat. His antigen test was negative.

On Dec 7 he was taken to hospital where the RT-PCR test came back positive.

On Dec 10 both he and his wife were confirmed to have contracted the variant. His wife’s Omicron infection was later confirmed as the country’s earliest recorded case.

“To slow the spread of Omicron we need to do three things – slow the arrival rate, especially under “Test & Go”, speed up vaccinations and wear masks,” he said.

Dr Supakij Sirilak, director-general of the Department of Medical Sciences, said yesterday that as of Dec 19, there were 63 confirmed Omicron cases but noted that the detection rate had increased to 3%, from less than 1% the week before.

He also noted that of arrivals who tested positive for COVID-19, about 25% were found to be infected with the Omicron variant.

Details of the infections came as Prime Minister Prayut Chan-o-cha yesterday announced that the country reached its goal of administering 100 million doses of COVID-19 vaccines.