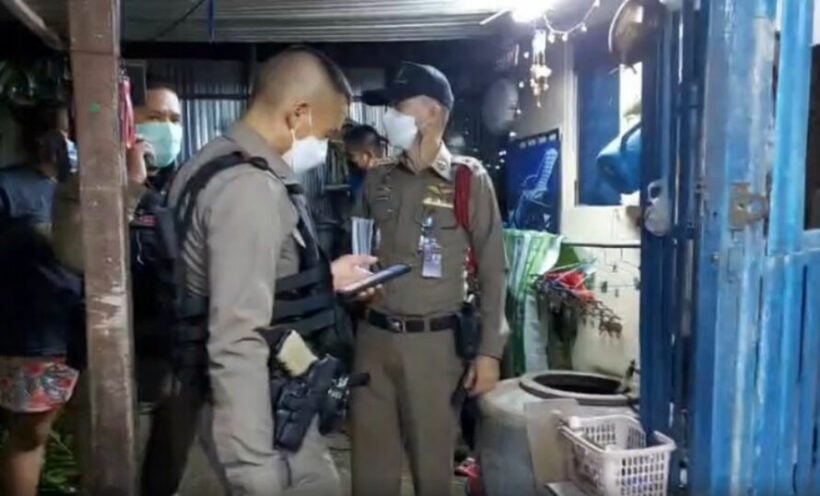 A Thai man says he does not regret the death of his “crazy” son, who allegedly tried to rape his aunty and grandmother in Samut Prakan in central Thailand last night.

The perpetrator stabbed his elderly grandmother in the neck and genitals. Neighbours ran inside and tied him to a pole. After that, he started having seizures, fell unconscious and died, according to witnesses.

In the early hours of this morning, officers from Phra Pradaeng Police Station were informed of a death at a two-storey wooden house in Song Khanong subdistrict.

Police found the body 33 year old Nattawut (surname withheld) lying in the middle of the house. Police say Nattawut had bruises and wounds to eye sockets, cheekbones, left earlobe, wrists, and both legs. His legs looked as if they had been tied up, said police. Police estimated that he died around one hour before their arrival.

Blood was scattered on the floors, sofas and mattresses said police. Police found evidence of fighting at the scene.

Nattawut’s 59 year old aunty Wanwen (surname withheld) told police that Nattawut had a “manic episode” and attacked both her and his grandmother. Wanwen said that Nattawut tried to rape her but she managed to escape.

Then, Nattawut dragged his 73 year old grandmother Pratum (surname withheld) out of her mosquito net, bit her breasts and tried to rape her. She fought with him until Nattawut stabbed her in the neck and genitals, causing heavy bleeding and serious injury.

Neighbours heard the commotion and ran into the house to help, where they found Pratum covered in blood. The villagers tied Nattawut to a pole.

Nattawut’s 50 year old relative Wichian (surname withheld) who lives nearby arrived at the scene when Nattawut was tied up but still alive. Wichian said that Nattawut was still speaking at first but then he began having seizures and lost consciousness. Wichian believes Nattawut was on drugs.

Manop revealed that Nuttawut had a 10 year history of mental illness and used to be a soldier. Manop said illicit drug abuse was probably the cause of his son’s seizures and ultimate death. He said his son had not been taking his prescribed medicine, which probably caused his manic episode.

Manop said that Nuttawut attacked him once before during a manic episode. Manop said he suffered broken ribs as a result of the attack. He said that Nattawut had also attacked his aunty in the past too.

Nattawut’s father said he “does not regret” his “crazy” son’s death, “after I saw blood pouring from my mother’s [Pratum’s] neck.”

The deceased will undergo an autopsy at the Institute of Forensic Medicine.