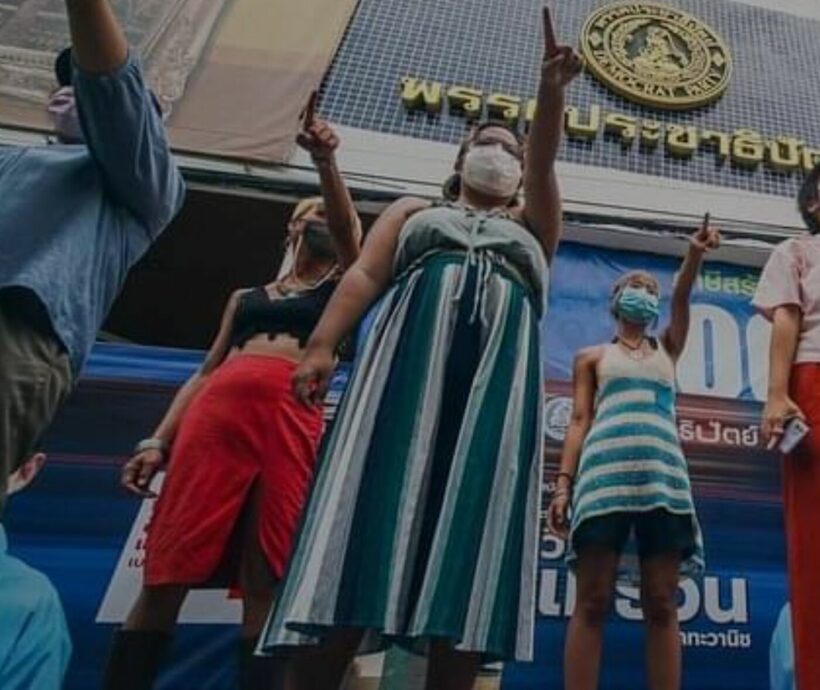 Thai feminist groups banded together this morning to stage a protest in front of Democrat party headquarters, in the wake of a slew of sexual assault allegations against the party’s former deputy leader, Prinn Panitchpakdi. On Sunday, Bangkok’s South Criminal Court detained Prinn for 3 counts of sexual assault and harassment, before temporarily releasing him on bail with various restrictions.

During today’s protest, women danced to the the feminist anthem “Sida Lui Faai” — i.e. “Sida Through Fire” — a reference to how victims of sexual abuse in Thailand are often blamed by the powers that be for the abuse that happens to them. They also read aloud a prepared statement, grilling the former party leader for inferring that sexual abuse is a “personal matter”. This, they say, is a way of deflecting blame from himself and onto his victims.

The feminist protesters put forth these five key demands:

• Political parties should not interfere with court cases.

• Political parties should apologise sincerely to the public regarding the case.

• An investigation should be launched into behaviors of past sexual abuse by party or committee members.

• All political parties must have a clear ethical code of conduct regarding sexual assault and harassment for all party and committee members.

• All political parties and committees in which Prinn Panitchpakdi was a member should investigate his past criminal record, especially anything related to sexual abuse.

Democrat party member and government spokesperson Ratchada Dhnadirek reportedly accepted the protesters’ demands. She also emphasised her party’s clear policy against sexual harassment. In order to help women who’ve been abused, she said the Democrat party has already set up a centre. According to Ratchada, the party is willing to listen to the public’s frustrations and suggestions, which they will discuss at the next committee meeting.

As the investigation continues, one thing is for certain — Prinn’s scandal is one of the most prominent #MeToo cases Thailand has ever seen and it’s just getting started.