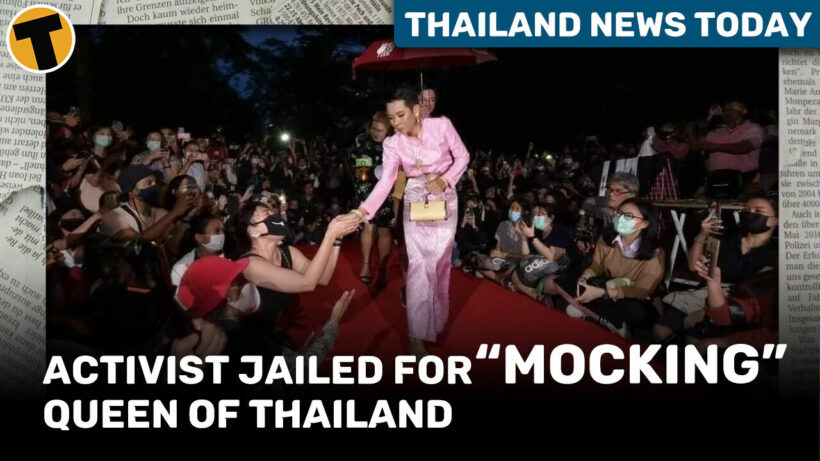 A 23-year-old Thai activist has been sentenced to two years imprisonment for royal defamation, under Section 112 of the Criminal Code, for attending a protest in traditional Thai attire.

Bangkok South Criminal Court read the verdict of Jatuporn Sae-Ung’s sentence today, almost two years after she walked the catwalk in a traditional pink Thai dress at a protest on Silom Road in Bangkok on October 2020. The court reasoned that Jatuporn intended to mock H.M. Queen.

The protest was held to oppose using 13 million Thai baht of taxpayers’ money for a fashion show linked to the royal family and called for monarchical reform. The protest fell the same day Princess’s new clothing collection was launched.

Protestors shouted, “Long Live the Queen” as Jatuphon walked the catwalk, while another protest held an umbrella over her head.

A royalist filed a lawsuit against Jatuporn for defaming the royal family under Section 112 of the Criminal Code, aka ‘lèse majesté’ law, which is punishable by up to 15 years in prison. Police are required to investigate all allegations of lèse majesté.

Alongside lèse majesté, the activist was found guilty of violating the Emergency Decree for attending a protest which could spread Covid.

At first, the court sentenced Jatuporn to three years imprisonment. However, her sentence was reduced to two years for giving a “good testimony.”

Jatuporn testified that she always wears traditional Thai clothes because they make her feel confident, not because she was trying to impersonate H.M. Queen or insult the royals. She said it was misinterpreted that way by the plaintiff. Jatuporn also wore a traditional Thai dress to hear the court’s verdict today.

The activist wants to appeal the case again. Her lawyer submitted a request for Jatuporn to be released on bail pending the appeal, with securities of 200,000 baht.

The Thai Meteorological Department announced another day of heavy downpours, flooding, and traffic chaos throughout the country and told the kingdom to brace itself. But, on the other hand, the Interior Minister played it down and said there was nothing to worry about.

The TMD made known it is 70% likely that another deluge will hit the nation, and the kingdom will suffer from heavy flooding. The Department of Disaster Prevention and Mitigation backed that there would be floods and river banks would overflow between September 11 and September 13.

Interior Minister Anupong Paojinda voiced concerns about the TMD and DDPM, saying the country is more capable of coping with more rain.

He said, “Although one or two tropical storms are expected later this year, these dams are still well below their retention capacity.

Despite the Interior Minister’s optimism, the DDPM warned heavy rain was on the way. The areas that will be hit the worst in Northern Thailand would be Mae Hong Son, Chiang Rai, Chiang Mai, Nan, Lampang, Lampoon, Payao, Phrae, Uttaradit, Phitsanulok, Phetchabun, Tak and Nakhon Sawan.

The TMD reported that from tomorrow the northern part of Thailand would be in danger from heavy downpours.

Thailand has been ecstatic to welcome back tourists – mainly finally – but now, after the pandemic, a new threat to tourism has emerged. The Tourism Authority of Thailand (TAT) said it expects a typically profitable third quarter to be muted by the flooding in 21 provinces across Thailand. In addition, floods are expected to affect corporate travel significantly.

Much of Thailand sees drops in hotel pricing outside the peak season, making it a perfect time for corporations to take advantage of and book business trips, incentive travel, employee retreats, and other business-related travel. Government business trips are also popular in the third quarter as the fiscal year draws to a close at the end of September, and all unused funds must be spent to maintain their budget for the next fiscal year.

Officials expect many provinces to be hit by a wave of trip cancellations due to flooding.

“Some corporate groups have already cancelled or postponed their trips this month which mostly impacted destinations in the east and the central region. Even though agriculture is the hardest hit sector, tourism in many places could be affected as purchasing power has decreased significantly.”

Flooding has created difficulties in travelling throughout regions and hazard warnings for tourism activities. For example, in Chantha Buri, campsites warn people not to go camping or trekking and risk being caught in torrential downpours. In Rayong, officials at Khao Chamao National Park caution that heavy rains have made swimming in the waterfall too dangerous.

The pelting rain has overwhelmed floodwater drainage, making getting around tricky in some areas. In the North, reservoirs and dams still have space and have not overflowed yet, though forecasts call for up to 20% more rain than usual.

But the south and northeast have entire river basins on hills like the Chi and Mun Rivers that run the risk of flash flooding during a downpour.

While corporate travel in the third quarter is expected to drop from flooding, the TAT suspects the fourth quarter may boom with all the pent-up energy of those longing to travel. Through August, 566 billion baht was generated from 102.9 million domestic trips, and the TAT believes the goal of 656 billion baht and 160 million visits total by the end of the year is within reach.

Malaysians made up the most significant portion of Thailand’s foreign arrivals in July, according to the Ministry of Tourism and Sports. Thailand welcomed 220,554 Malaysian tourists in July, most arriving via the land border crossing in Songkhla province.

In a post-pandemic world, Malaysian travel to Thailand has never been more accessible, with the removal of Thailand Pass and insurance requirements.

Other top countries sending tourists in July were…

Thai tourism to Malaysia is also booming, with Thais taking the second spot for the highest number of foreign arrivals in Malaysia after Singaporeans. Thailand is one oMaMalaysia’s essential short-haul markets. Tourist arrivals from Thailand could reach 800,000 by the end of 2022, according to TTR Weekly.