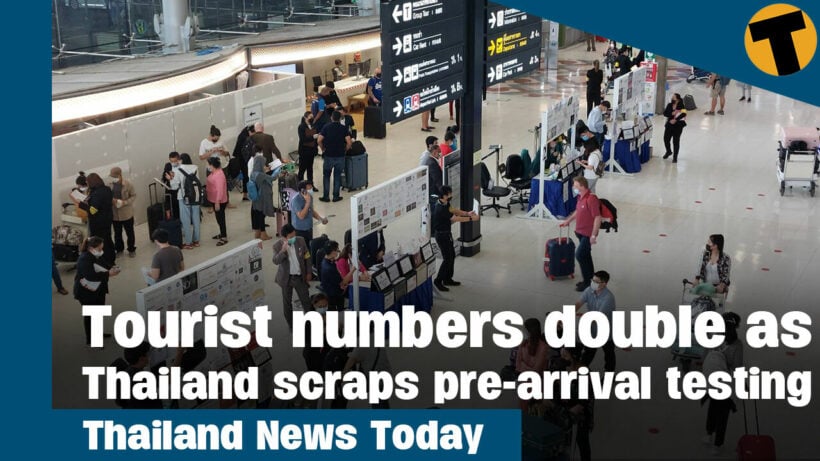 According to Dr. Supakit Sirilak, the director-general of the Department of Medical Sciences, the new XE variant is a combination of the two Omicron sublineages BA.1 and BA.2. Further mutations to the virus are normal as cases rise, resulting in new variants like Deltacron, which combines the m-RNA from Delta and Omicron strains.

And according to Biotec expert อนันต์ จงแก้ววัฒนา, if you’ve already been infected with the Omicron BA.2 sub-variant, then you may have some immunity to XE because of the genetic similarities of BA.1 and BA.2, …

Basically “Don’t be more afraid of XE than BA.2 as that strain has already been around town.”

On Saturday, the WHO has also recognized the new XE variant, warning that it could be more transmissible than previous variants, though not more severe. They said there have been less than 600 confirmed cases since the first case was detected in January in England.

Travellers are flooding back into Thailand after the country scrapped its pre-flight Covid PCR testing requirement. Arrivals to Suvarnabhumi International Airport have almost doubled to around 12,000 passengers per day, arriving on a flurry of new inbound flights.

On Sunday afternoon, international travellers teemed throughout the airport, reaching near pre-pandemic levels. They were greeted by officials and hotel reps who shepherded them to their PRC testing sites upon arrival.

Starting April 1, international travellers entering via the Test & Go and Sandbox themes do not need a negative PCR test certificate issued within 72 hours of departure of their flight to Thailand.

Upon arrival, they’re still required to take a PCR test on arrival and wait at an SHA plus hotel until they receive a negative test result. They’re also required to take an ATK self test on day five and report it via the Thailand Pass app.

Meanwhile, Thai PBS reported that PCR testing times have decreased, with results available within 4 hours of testing. This may eliminate the need for many travellers to stay overnight in a quarantined hotel, encouraging more tourists to enter the country.

It is also now possible to enter Thailand via land in Satun, Nong Khai, Udon Thani and Songkhla provinces, or by the sea at ports in Surat Thani, Phuket and Chonburi provinces.

The rules have eased just in time for Songkran celebrations, or Thai new year, which will take place from April 13 – 15.

Thai Prime Minister Prayut Chan-o-cha says he’s concerned about the management of Covid-19 waste, such as used face masks and ATK test kits, because of the risk such contaminated trash poses to garbage handlers.

Prayut says bags containing infectious waste should be marked so binmen and waste disposal facility staff can take the necessary precautions when disposing of the rubbish.

The prime minister asked the Ministry of Health to inform Covid patients undergoing home isolation to sort their rubbish and mark bags of infectious waste that might contain ATK test kits, used face masks, tissues, bedding or anything else which could carry bodily fluids. Marking the bags properly will allow garbage handlers to take the necessary precautions such as wearing full PPE.

The PM has instructed responsible agencies to properly and efficiently dispose of waste that is possibly infected with Covid-19 while case numbers remain high across the nation.

Director-general of the Department of Health Atthapol expects Thailand will produce an average of 789 tonnes of infectious waste per day in April, while waste disposal facilities nationwide can only handle 342.3 tonnes daily.

The Department of Health is creating 11 additional waste disposal sites to handle the overload of infectious waste, with a capacity of

The total disposal capacity will rise to

which should be enough to deal with the mountains of face masks and ATK test kits thrown out of Thai households this month.

Police have arrested a third suspect in the death of drowned TV actress Tangmo. On Sunday Visaphut, known by the nickname of “Sand” , surrendered to police in Nonthaburi, after they issued a warrant for her arrest.

Thai PBS reported that Sand was taken into the police superintendent’s office for questioning. She was accompanied by her lawyer and prepared a surety to bail herself out. A crowd of reporters awaited her arrival, causing her vehicle to circle the parking lot several times before she got out and slipped quickly into the police station. She gave no comment when she left.

Police say Sand was the last person who was with Tango on the speedboat when she fell into the river on the night of February 24 and drowned. Sand had earlier said Tango was holding her legs while she attempted to pee off the back of the boat when the vessel lurched and she “shook” her legs so as not to fall in the water with her.

Police have since debunked the peeing story as a lie. Last month they said the claims of the five witnesses had conflicting details and that all of them could be charged with giving false statements. Meanwhile, a Senate panel recommended the witnesses take polygraph tests.

At the start of the investigation, police charged the boat owner and his friend with operating an unlicensed vessel and negligence leading to death. They have now also been charged with providing false statements and destruction of evidence. The investigation continues.

Police have arrested a transgender woman who allegedly stole a gold necklace off the body of a westerner in Bangkok’s Asoke neighbourhood last week after a video of the incident went viral.

The thief reportedly said she stole the golden accessory because she’d lost her job and had to pay off a gambling debt.

CCTV footage of the incident shows the 30-year-old trans thief pretending to hug the unsuspecting Western man while he was walking on the sidewalk along Sukhumvit Road.

He didn’t notice her quick hands nimbly snatch the golden necklace from around his neck while he recorded a selfie video of the encounter.

Later, when he realised his necklace had disappeared, he checked the video footage to find the thief. His self-filmed video titled “Sukhumvit road. Gold chain rip off. Be careful of the ladyboy gangsters” has gone viral on social media.

Thai media reported that after the transgender woman stole the necklace, she took a taxi to the suburban province of Samut Prakarn south of Bangkok, where she said she sold it to a gold shop for 26,000 baht.

Police officers checked CCTV cameras around the area and were able to find out where she lives. They then arrested her at a dormitory in the province.

The suspect confessed that she did steal the necklace because she didn’t have a stable job and had debt from gambling.

The police also shared that she had committed other crimes before, having been charged with theft, assault and prostitution in Pattaya.