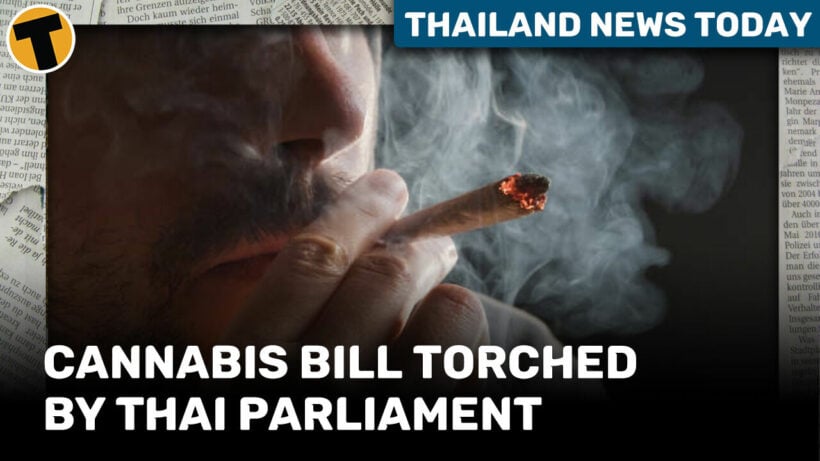 The most recent cannabis bill has been quashed after a 198 to 136 vote in the House of Representatives. Lawmakers say the statement’s wording was “loose and could potentially expose youth to health risks.”

The bad news is that if the bill is withdrawn, there may not be enough time to push it through the current Parliament’s session as it expires in March of 2023. The conservative Democratic Party has remained steadfast in its position of reinstating cannabis to the narcotics list. In addition, some MPs claim that they’ve received reports of cannabis users becoming violent and mentally ill.

The Democratic Party says loopholes such as allowing the general public to register to grow cannabis plants can lead to recreational use, negatively impacting society.

Another Cannabis and Hemp Bill has been reportedly vetted by a House committee and is about to be forwarded to the House for consideration in the second reading. Bhumjaithai party spokesman ภราดร ปริศนานันทกุล said the bill being deliberated is intended to provide clear guidelines for the use of cannabis. If this legislation were dropped, there would be a vacuum regarding the use of cannabis.

Since being decriminalised in June, the spokesperson for the House committee says current data shows a downward trend for cannabis-related patients in hospitals. He suggests this is due to awareness campaigns that have educated people and kept the substance under control.

He acknowledged that the cannabis rollout has been flawed but that there are more safety measures than when kratom was legalised last year.

Cannabis has been brought into the mainstream since its legalisation, with hundreds of small businesses popping up and thousands of established businesses incorporating cannabis and hemp-based products. Yesterday, the Central Pattaya shopping centre hosted a cannabis festival promoted by the mayor. In November, another large cannabis fair is planned at the Chang International Circuit in Buri Ram.

The transport ministry is hosting the sale event at Gate 1 to stimulate tourism, exchange knowledge about transportation facilities and make travelling around Thailand more convenient.

As well to plane tickets, booths will also be selling M-Pass, Easy Pass and Toll Way cards at exceptional prices.

A Thai celebrity couple is charged over their role in an online Ponzi scheme. Thailand’s Criminal Court issued an arrest warrant for พัฒนพล มินทะขิน Minthakhin and his wife, singer สุธีวัน ทวีสิน. They reported to the Department of Special Investigation yesterday to acknowledge the charges. The costs include public fraud, putting false information into a computer system, and conspiring to obtain loans to defraud. Both people denied all charges and said they would provide evidence to counter them.

The celebrity couple previously posted on Facebook that they had never persuaded anyone to invest in Forex-3D and noted that they were not listed as business partners in the company.

The DSI previously summoned the couple back in 2019 to clarify their connections to the man who is thought to be behind the scheme. That man, อภิรักษ์ โกดธิ, is accused of a multi-billion baht fraud. Forex 3-D allegedly claimed to be an online dealer in foreign exchange, with a flashy website and all, but was then unlisted and deemed a Ponzi scheme.

Actress สาวิกา ไชยเดช, along with her mother and brother, were indicted last month on charges of operating the scam. Both were denied bail as they stand accused of cheating thousands of people out of around two billion baht. The DSI has opened a channel for alleged scheme victims to file complaints. About 9,000 people have complained to the DSI.

Another famous TV actor has been identified as possibly being involved in the scam. However, the DSI says that no one has named him specifically nor filed a complaint against him, and he is currently remaining anonymous. A Facebook page created to gather victims’ names claimed the anonymous actor had encouraged many people to invest in the scheme.

Famous Thai rapper, ดนุภา คณาธีรกุล, who goes by the stage name of Mili, had to cancel her show in South Korea because she was denied entry into the country.

Her record label announced yesterday that Milli couldn’t travel to South Korea to perform at the Hiphopplaya Festival on September 18 because of a visa problem.

Milli’s career on the international stage took off following her show at this year’s Coachella after fans saw her eat sticky Mango rice on stage. But they will have to wait a little longer to see the 19-year-old scoff at her favourite dish for now. The Thai star’s team apologised to her fans who had already booked tickets.

The official site of the Hiphopplaya Festival also informed fans that they have until tomorrow at 6 pm to cancel their tickets and get their money back for both shows.

Milli’s team did not state a specific reason for visa problems, but South Korea is well known for its strict immigration policy.

A series of reports about Thai people being denied entry into South Korea started last month. The country reopened its border in April this year, but visitors had to complete the Korea Electronic Travel Authorization before arriving.

The immigration restrictions are more stringent due to the increasing numbers of illegal migrant workers flooding the country. As a result, many Thai people have been turned away from customs, especially travellers to the popular Jeju Island destination.

Jeju Island targets Thai workers who seek work in the agricultural sector, which is more lucrative than in Thailand. So maybe they thought Mili wanted to plant some mango trees for her sticky rice.

According to BBC Thai, the Thai Labour Office in Seoul reported that just over 1,500 Thai people travelled to Jeju Island between August 2 to 22 this year. Some 649 people were allowed into the country, and over 100 disappeared after entering.

The Thai Embassy in Seoul informed the media that approximately 139,000 Thai people work illegally in South Korea, while only around 42,500 people live and work legally in the country. In addition, about 17,000 people work and stay under Thailand and South Korea Employment Permit System.

Some Thais are willing to pay 80 to 100,000 baht to fake travel agencies to work there, and many of them end up in the South Korean immigration rooms and lose all of their money.