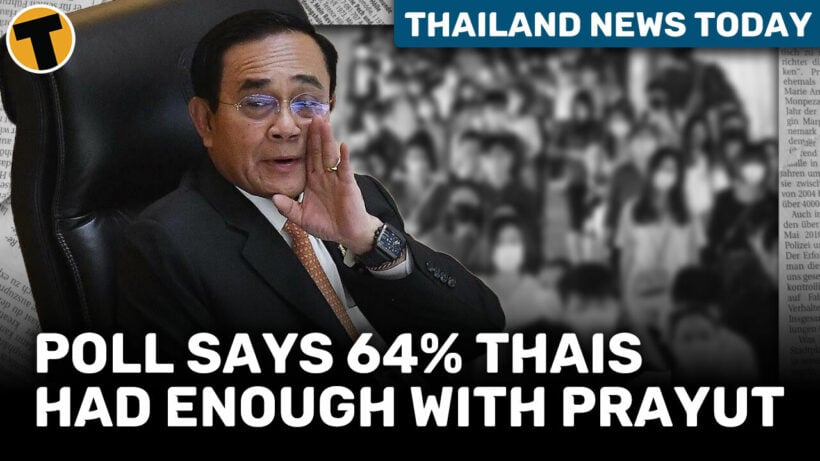 A new poll from the National Institute of Development Administration (or NIDA) showed that the majority of people want PM Prayut Chan-o-cha to finish his role as prime minister at the end of his eight year term on August 24.

There have been different interpretations of the current constitution and whether the prime minister is eligible to continue his role or if he has now served his eight-year term.

The constitution allows for prime ministers to serve a maximum of two four-year terms, making a total tenure of eight years. However, the most recent iteration of Thailand’s Constitution was ratified in 2017, just 5 years ago, making PM Prayut current term technically his first under THIS  constitution. So, is he eligible for another term or not?

According to this NIDA poll, taken between August 2 and 4 by phone, the majority of people want Prayut tenure to end this month. Some 64% of those polled said that the prime minister’s eight years are up and he should announce his departure before the end of his term on August 24.

The poll surveyed 1,312 adults over 18 from a variety of incomes, jobs, and levels of education.

While the majority of people feel Prayut should confirm he is leaving at the end of the term, 32% think that the court should make a final decision. The remaining 2.8 or so % declined to comment on the matter.

The poll also asked about the trio of top generals running the country: General Prayut, General Prawit Wongsuwan, and General Anupong Paochinda. A solid 80% of people polled did not want any of those three to be involved in forming the next government.

Perhaps emboldened by this new finding, Deputy Prime Minister Anutin Charnvirakul rushed in to say that, if people want him, he is willing to step in as the next prime minister of Thailand.

Anutin, who also has been serving as the Minister of Public Health throughout the tumultuous pandemic of delayed vaccine rollouts and xenophobic comments, said that if the citizens of Thailand want him to be their next leader, he is willing to be a candidate.

Anutin is the leader of the Bhumjaithai Party and travelled to Lop Buri province yesterday to make a formal announcement of the party’s new nominees in the coming election for Members of Parliament.

It is a tradition of the Bhum Jai Thai Party, which currently controls 3 ministries to make the party leader the Prime Minister candidate as well, so Anutin said he would step into the role if he must.

“If I have to be the prime minister, I will be.” Oh what a saint.

Cheap and flammable sound absorption panels are thought to have caused the tragic fire at Mountain B nightclub in Chon Buri province. The total death toll rose to 15 after a man injured in the fire died in a hospital on Saturday. Around 40 people were injured in total.

The owners of Mountain B soundproofed the ceilings and walls of the nightclub with flammable sound-absorption sponges, causing the fire to rip through the venue in seconds. With 50 people inside the room and only one small exit route, several people could not make it out in time.

Survivors reported that they saw burning sound-absorption panels melting and falling on top of people, causing their death. The blaze is reminiscent of the New Years Eve 2008 fire that occurred at Bangkok’s once-renowned club “Santika Pub” in Ekkamai. A total of 66 people died in the fire and 103 people were injured after fireworks were shot at the ceiling inside the venue.

The court acquitted the owner of Santika Pub Wisuk Set Sawat of gross negligence causing death, despite him not having signs showing the fire exits in the building and not installing enough emergency lights in accordance with the Building Control Act.

Mountain B was open illegally. It was built illegally, did not possess a proper licence, and was open past the hours specified by law. The venue had previously been shut down several times before and the owner was most recently arrested in July. Yet, the venue managed to open last Thursday.

Mountain B’s 27 year old owner was arrested and faces charges of reckless behaviour causing death and operating a nightclub without a licence.

Thailand’s Federation of Thai Industries said it fears China will deny Taiwan the raw materials needed to make semiconductors that the Thai automobile industry is dependent on.

The FTI made it known that the Thai motor industry is desperate for semiconductors, that there is a worldwide shortage and, if they can’t get them imported, it means higher car prices, including EVs.

Ironically, it was only on Friday that Thailand revealed it could benefit from the mini-trade war between China, and Taiwan and was looking to supply a number of different food products that the mainland would ban.

Tensions escalated between China, and Taiwan because of a visit to Taipei by US House Speaker Nancy Pelosi. In response, China embarked on a series of military exercises around the Taiwan Strait and allegedly followed it up by banning the import of some fruits and fish products from Taiwan.

Surapong Paisitpatanapong, vice-chairman and spokesman for the FTI’s automotive club, said if the China-Taiwan relationship escalates and Beijing decides not to export silica, the semiconductor shortage will worsen.

Taiwan Semiconductor Manufacturing Co is the world’s largest contract semiconductor maker and imports 90% of its total silica sand from China.

The company supplies chips to many industries, including the automotive industry. If its production is disrupted, the ongoing [semiconductor] shortage will get worse.

As it currently stands, automakers have had to suspend production of some car models and delay deliveries. Some need to consider increasing the prices of cars and motorcycles due to the rise in semiconductor prices.

This news comes after the Thai Hotels Association said last week that South Thailand’s hotel occupancy is expected to rise during ‘high season’ from October to December. About 80% of hotels in Songkhla province have reopened after ‘Thailand Pass’ was scrapped on July 1.

The council’s president said Songkhla expects about 800,000 foreign visitors in 2022, or “about 40% of the two million visitors per year before the pandemic.”

It remains to be seen just how many foreign visitors will make their way to the ‘Land of Smiles’ this year. But with the major jump in Airbnb searches from both Thai and international travellers, it seems so far that tourism in Thailand is slowly but surely making a comeback.