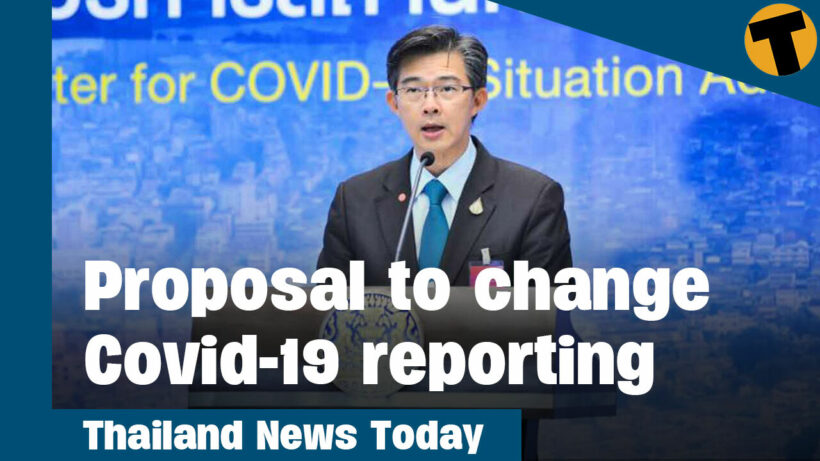 After Thailand’s number of daily Covid-19 infections went above 10,000 this weekend, the government plans to change how it does daily reports.

In a two-day a week test, the government reports will only focus on deaths and serious cases where people needed to be hospitalized with ventilators, or had pneumonia. The Ministry of Public Health says that even though infections are rising, the number of deaths and serious cases is stable. The government says this new way of reporting Covid-19 in Thailand is meant to lessen public anxiety.

With vaccines, Thailand’s Covid-19 death rate has gone down from 2% to 0.2%. The ministry says it wants to create a public understanding that people can balance their lives and live with Covid safely and many who catch the virus are asymptomatic. People who do have symptoms and need to be treated can often go home after just a few days.

The ministry wants to focus on deaths and serious cases because these numbers are now stable. Out of 50,000 patients on medical care, 500 have pneumonia, and 100 are on ventilators.

The Pattaya News noted there is not a date set yet for this standard to begin. Meanwhile, Thai officials are talking about easing restrictions, with the director-general of the Department of Disease Control saying the government wants to move away from imposing lockdowns during outbreaks

The Labor Ministry is expected to approve a raise in Thailand’s daily minimum wage from 336 baht to a flat rate of 492. The sharp increase comes just 2 years after a previous hike and is expected to lead to a rise in prices for general goods and services.

The Tripartite Wage Committee consisting of employers, worker representatives, and government officials had proposed the rate hike, citing various expenses workers have to meet, including daily expenditure such as 3 meals, transport costs, and monthly expenses such as rent, utility bills, car repayments, and various other expenses for family members.

According to the Nation Thailand report, an unnamed source says the Labor Ministry has pledged to increase the daily minimum wage but has not yet confirmed if the proposed 492 rates will be approved. It’s not known if employer representatives have discussed the proposed new rate.

The current rate ranges between 313 and 336 baht depending on the region. If approved, this will be the first time a flat minimum wage has been implemented across Thailand. The report goes on to say that the hike is expected to lead to a rise in prices for general goods and services.

Health officials in Thailand are urging the public to take precautions against mosquito bites, with dengue fever likely to become more prevalent this year.

Dr. Opas Karnkawinpong from the Department of Disease Control says the number of dengue infections had decreased in the last 2 years, primarily as a result of people staying home during the pandemic. However, the mosquito-borne illness is expected to become more widespread this year.

Since the start of the year, 193 people have contracted dengue fever, with 2 patients, a 37-year-old and a 40-year-old, dying from the illness.

According to a Thai PBS World report, the patients are thought to have been unaware that they had dengue and used over-the-counter medication. Opas warns that non-steroidal anti-inflammatory drugs, such as aspirin, are often used instead of paracetamol to bring down a fever. However, their misuse can lead to internal bleeding and death.

Dengue fever symptoms include high fever, which can last for between 2 and 7 days, headache and muscle aches, a red rash on the hands, legs, and other parts of the body, stomach ache, nausea, and loss of appetite.

Some patients can go on to develop more severe symptoms and can collapse from shock or even die. Opas advises family members to monitor the condition of dengue patients closely and seek medical attention if the fever does not begin to reduce in 2 days with temperature-reducing medication or through cooling the body with wipes.

The DDC chief says people should check for potential mosquito breeding grounds and eradicate larvae from water containers and ponds, either by disposing of the water or using products such as Abate larvicide or larvae-eating fish.

Of the 193 dengue patients diagnosed this year, most were found in central Thailand, including Bangkok, Nakhon Pathom, and Samut Prakan.

Police investigating the murder of an Indian gangster shot dead in Phuket on Friday night say they now have security camera footage of the incident.

Officers are reviewing CCTV footage of the moment 32-year-old Jimi Sandhu was gunned down outside his villa in Rawai, in the south of the island. His body was found in the grounds the following morning.

Sandhu, who had a history of criminal activity and links to gangs in Canada and India, entered Thailand by private jet on January 27, bearing a fake Canadian passport.

Officers are now reviewing footage of the 2 gunmen who ambushed Sandhu as he returned to his villa just before 11 pm on Friday, February 4. The men can be seen emerging from bushes as Sandhu arrives. They are dressed in white hoodies and short trousers and footage shows them shooting the victim several times before fleeing the scene. Police say their white hoodies were found discarded in a rubber plantation about 2 kilometers away and have been sent for DNA testing.

Now, authorities are checking the records and possible motives of various individuals. Several people linked to Sandhu are being summoned for questioning.

The report goes on to state that Sandhu was born in India in 1990, emigrating to Canada in 1997, and living in Abbotsford, British Columbia. By the age of 20, he was wanted by the authorities in India in connection with 14 drug factories operating across 3 states in the west of the country. It’s understood the narcotics were trafficked to Thailand, Canada, and Africa.

The victim was also involved in criminal activity, including illegal drugs, in Canada and was eventually deported in 2016. Since then, he’s believed to have traveled back and forth between Dubai and Southeast Asia.

After a Karen man was seriously injured after three tigers attacked him in a Kanchanaburi forest in January, the director of Protected Area Regional Office 3 says patrols from two national parks will guard locals against attacks.

The man managed to climb up a tree to escape, but the tigers killed two of his dogs. He was taken to a hospital with wounds all over his body. Shortly after the attack, park officials banned entry into forest areas for 90 days to keep locals safe.

But animal safety is still a problem. Camera traps in the forest caught a tiger eating a dead buffalo close to where the attack happened. The director said it’s believed to be one of the same tigers that attacked the Karen man.

The tension between human safety and wildlife conservation is an issue with tiger attacks. Even though the director said patrols would protect locals from tiger attacks, he also said they would guard the tigers against danger.

A man in Bangkok got more than he bargained for when he poured the beer over a woman who turned out to be a Muay Thai boxer.

A video of the incident, in which 24-year-old Pareploy Saeaia can be seen kicking and shoving the perpetrator, has since gone viral. In the clip, Pareploy can be seen in a wet dress after the man poured the beer over her because she refused to have a drink with him. The boxer has since shared the clip on her own Facebook page.

In her comment, Pareploy said quote “If this happens to other women, they might choose not to respond. This guy chose the wrong person though because I’m a boxer.”

According to a report, the woman was having dinner with friends at a food outlet in the Huai Kwang district of the capital when the man approached her and asked her to clink glasses. She refused and the man returned 5 minutes later, pouring beer over her as she ate her meal.

แพรพลอย can then be seen following him out into the street, where she proceeds to aim punches and kicks at him. The man did not fight back but also did not apologize either. Since then, both have appeared at Huai Kwang police station, where they apologized to each other and paid fines of 1,000 baht each.

The Bangkok Post reports that Pareploy works as a Muay Thai trainer, having been a fighter since a young age. To date, she has participated in 50 fights, winning 40 of them, not including this one. She has also been winning medals at the national level since 2013.