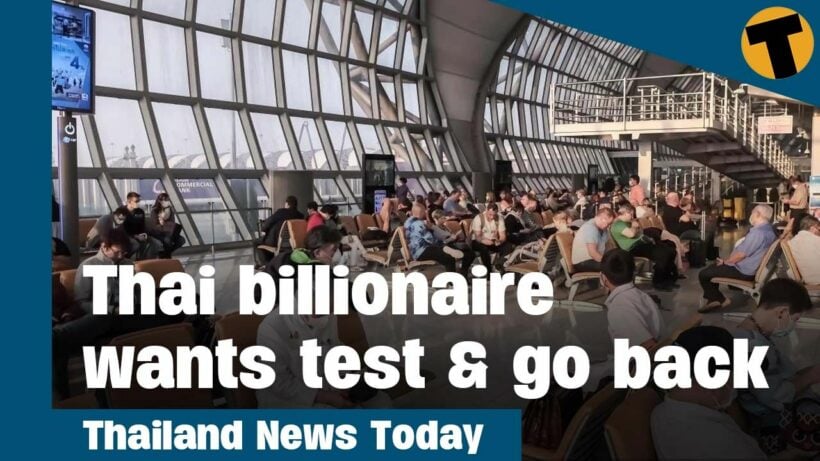 In today’s news, Thailand reports a rising level of Covid infections among the country’s medical workers. Meanwhile, billionaire William Heinecke from Minor group writes an open letter to the Thai prime minister. All this is coming up in today’s show.

You’re watching Thailand News Today, bringing you the latest headlines in Thailand and beyond. And in today’s news.

The board chairman of Minor International has called on the Thai government to reinstate the suspended Test & Go entry scheme. Failing that, William Heinecke says they should expand the number of sandbox destinations.

Minor International is based in Bangkok and operates 530 properties, including the Anantara, Four Seasons, and Radisson Blu brands.

In an open letter to PM Prayut Chan-o-cha, Mr Heinecke says the government needs to acknowledge that the Omicron variant causes milder illness than previous variants and therefore it needs to be handled differently. He says instead of shutting the country to foreign tourists, the government must focus on vaccinating the unvaccinated and rolling out booster doses.

Heinecke says he wants to see the Thai government welcome tourists in the same manner as other countries. With the Omicron variant, measures such as mandatory health insurance and advance hotel bookings are not necessary, he says. Foreign tourists should only have to provide proof of vaccination and a negative Covid test in order to enter Thailand.

Despite this, the governor of the Tourism Authority of Thailand says the Test & Go entry scheme may be resumed only once the Omicron situation improves.

ยุทธศักดิ์ สุภสร says that so far, the variant is not affecting tourism sentiment on the southern island of Phuket. He says he met with the Phuket governor on Monday and was informed that most infected tourists are asymptomatic or only exhibit mild symptoms.

The government’s Covid task force says it’s worried about a rising level of infections among the country’s medical workers and Dr. สุมนี วัชรสินธุ์ from the CCSA has called on all healthcare workers to come forward for a fourth vaccine dose.

According to a Thai PBS World report, she says medical workers becoming infected is a cause for concern as it can have wider implications on hospital staffing.

At Bangkok’s Bhumibol Adulyadej Hospital, the emergency ward had to be temporarily closed recently, due to a number of medics becoming infected with Covid-19. Sumanee adds that in the eastern province of Chon Buri, 16 doctors contracted the virus in a single day. She says the increase in cases among healthcare workers means it’s vital they get a fourth vaccine dose.

Fourth doses have already been administered to over 500,000 frontline medical workers and other high-risk groups. Sumanee says there has been no decision taken yet on when fourth doses might be rolled out to other groups.

The CCSA has also said it’s concerned about rising infections in tourism provinces operating sandbox schemes. Thai PBS World reports that in Bangkok, cases have risen significantly since the end-of-year holiday period. However, around the country, new case numbers appear to be evening out at around 7 to 8,000 a day. Health minister Anutin Charnvirakul says he’s hopeful cases of the Omicron variant will not exceed 30,000 a day as previously feared.

Meanwhile, the CCSA has ordered the Education Ministry to prepare for schools returning to onsite learning, including the development of contingency plans. Earlier this week, Sumanee confirmed there was no need to close schools where Covid-19 is detected, as most schools have effective measures in place to deal with such a scenario. She said closing schools would only further negatively affect children whose learning has already been disrupted for two years as a result of the pandemic.

Health officials say there has been a surge in infections in Bangkok, linked to restaurants, bars, and other crowded places, like student dorms.

939 new cases were reported in the capital yesterday, 45 of which were imported. Dr Suthas Chottanapan from the DDC says 300 of the local cases were contracted in restaurants operating as pubs, or in other crowded places such as student dorms and police flats.

In the case of restaurants and bars, Suthas says that any SHA+ accredited venue found to have been flouting disease control measures will have their accreditation removed. He has also advised the public not to frequent poorly-ventilated places, especially where people are not wearing face masks because they are drinking.

Meanwhile, พงศกร ขวัญเมือง from the Bangkok Metropolitan Administration says there have been no major Covid clusters reported in the capital. Health officials have set aside around 10,000 beds to cope with the highly-contagious Omicron variant.

Currently 18% of the capital’s hospital beds are occupied by Covid patients. The BMA is also increasing the number of vaccination centres to 129.
—–

A group of four men are facing charges for allegedly hunting and killing two endangered Bengal tigers at a national park in Kanchanaburi, a western province bordering Myanmar.

Thai park rangers got a report over the weekend that hunters were killing wild animals at ทองผาภูมิ National Park near the border. Rangers found a camp that poachers had set up with two Bengal tiger pelts strung up to dry and the tiger meat still cooking on the grill. When the officers approached the campsite, a dog started barking, giving the people at the campsite a chance to flee.

The four alleged poachers surrendered to the police claiming that their motive is to take revenge for their cows. They informed the police that they make a living by raising cattle, but 20 cows owned by them and other local farmers were killed by tigers over the past two months.

They said that they didn’t know how to solve the problem. They allegedly used the dead cow meat as baits and killed two tigers and insisted that there were no other motives behind this hunting.

Four renowned Thai women have been recognised in Forbes magazine’s list of influential business leaders, scientists, and other notable figures. The 50 over 50: Asia 2022 list acknowledges those who are leaders in their fields in the Asia-Pacific region.

Forbes published the list on Tuesday and it includes จรีพร จารุกรสกุล, co-founder and chairwoman of logistics facilities company, WHA Corporation. 54-year-old Jareeporn has also been outspoken in her support of Thailand’s plan for the Eastern Economic Corridor and despite the challenges of Covid-19 restrictions in 2020, managed to lead her firm to record revenue of 9.4 billion baht and a net profit of 2.5 billion baht.

The list also features นวลพรรณ ล่ำซำ, president and CEO of Muang Thai Insurance. Nualphan, aka “Madam Pang”, also manages the national football team. As if that weren’t enough, she could be running for Bangkok governor, a potential candidate of the ruling Palang Pracharath Party in the forthcoming election to choose who will lead City Hall.

Also appearing on the Forbes list is รื่นวดี สุวรรณมงคล, secretary-general of the Securities and Exchange Commission. The 57-year-old is the first woman to hold the position of financial regulator in a traditionally male-dominated sector. In her role, she has had to take on challenges such as blockchain technology and viruses causing unprecedented disruptions.

Renowned chef สุภิญญา จันสุตะ, aka “เจ้ไฝ”, is also on the list. She is the 77-year-old owner of the Michelin-starred Raan Jay Fai restaurant in Bangkok. A self-taught cook who used to work as a seamstress, Supinya taught herself to master dishes such as Japanese omelettes, a key influence behind the crab recipe that became her signature dish. She earned her Michelin star in 2018 and has held on to it every year since.

After frenzied reporting on Thai news yesterday, the police manhunt for a Covid positive Russian tourist thought to have escaped his Phuket Sandbox hotel is over and considered a false alarm.

The police 191 hotline received notification from the Patong Parak Hotel in Phuket that the man had disappeared from his room after testing positive for Covid-19.

The man was eventually found in the last place you’d think to look for him — his own hotel room. The 25 year old Russian man had been reported as a fugitive when he was found by staff not to be in his hotel room, but by 5:30 pm they were able to confirm that he was now back in the hotel and in his room.

He told police that he was feeling stressed out, perhaps because of the positive Covid result, and decided to go out for a walk on Patong Beach to get some fresh air.

Police circulated copies of the Russian man’s passport as well as the lab test results confirming that on Monday he had tested positive at Vachira Phuket Hospital.

The search was called off when he was found in his own hotel room, having come back of his own volition after taking a walk on the beach and clearing his head.

And that’s all for our report. Thailand News Today will be back on Monday on the Thaiger channel. Also be on the lookout for our new channel next week focusing on fun, provocative, and educational content. Meanwhile, you’re now up to date on the Thaiger.