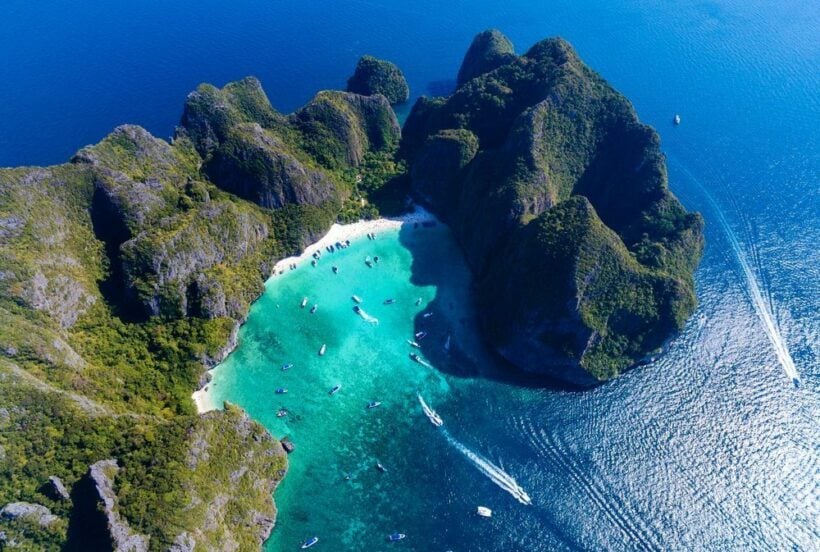 Filming for “The Beach” began at Maya Bay at the Phi Phi Islands in Krabi province, southern Thailand, in 1998. The bay became a world-famous tourist destination following the success of the film, but “The Beach” hasn’t been the same since.

A lawsuit was filed against the movie company for offences under Thailand’s National Park Act (1961) and National Environmental Quality Promotion and Conservation Act (1992).

Lawsuits were also filed against Thailand’s Forestry Department for giving the film production company the green light to “renovate” Maya Bay to make the movie picture perfect. The renovations had devastating and lasting effects on Phi Phi Island’s natural environment.

The uprooting of plants at Maya Beach and levelling of barrier-forming sand dunes has led to mass soil erosion, say environmentalists. Maya Bay was previously protected against soil erosion by native plants whose roots kept the sand together. Without the plants, all the sand washed away into the sea.

The beach was widened for the production of the movie, “which meant removing the natural barriers protecting it from the sea,” said Boonkasem Saokow, a local artist from Krabi province.

“It’s quite clear that the film company has destroyed a beach which is part of a national park.”

The Supreme Court has demanded Thailand’s Department of Forestry to use the 10 million baht from 20th Century Studios to restore the natural environment at Maya Bay to its natural state.

The 250 metre beach at Maya Bay reopened in January this year after a three and a half year closure. It opened to tourists under strict environmental protection measures with a maximum of 375 tourists per hour between 10am – 4pm.

In July, the bay closed again for another period of environmental restoration. Authorities planned for the bay to reopen again on October 1, in a few weeks. However, with today’s news, perhaps the bay will remain closed until further notice.