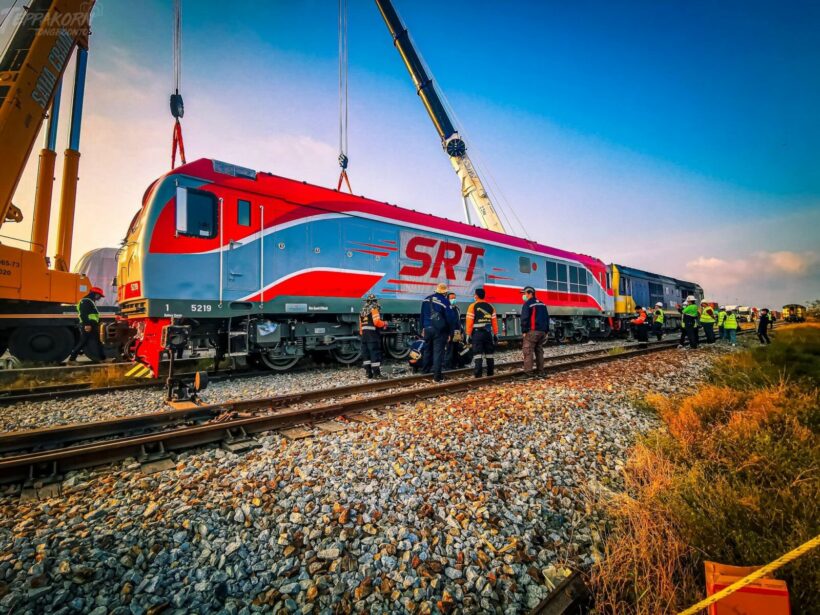 Thailand’s new electro-diesel trains – named after a Japanese superhero – are going on test runs before being deployed on long-distance journeys across the nation. The State Railway of Thailand, or SRT, received 20 “Ultraman” trains on Wednesday. Ultraman’s first test run between Bangkok’s Bang Sue Station and Chachoengsao was a success, according to the SRT. The trains will be tested further prior to public use, which is scheduled to begin in June.

The trains are intended to carry both cargo and passengers on long-distance routes. Ultraman – which can travel up to 120 kilometres per hour – will travel from Bangkok to faraway destinations such as Chiang Mai in northern Thailand, Nong Khai in northeast Thailand and Su-ngai Kolok in southern Thailand. Carrying 1000 tonnes of cargo, the train can reach a maximum speed of 100 kilometres per hour.

The SRT invested over ฿6.5 billion baht in the trains which were produced by Chinese manufacturer CRRC Qishuyan. The trains arrived in Thailand via Laem Chabang Port in Chon Buri province in February. China is currently manufacturing 30 more Ultraman trains which are expected to arrive in Thailand by 2023.

Each train will be thoroughly inspected and tested before commercial use begins in June. Deputy governor of the SRT Siripong Prutipan said the tests will assess the electric, braking and safety systems of the trains. The trains feature an Electronic Air Brake system from Germany, consume less fuel and release less pollution than regular trains, he added.

“SRT is confident that these electro-diesel locomotives will help make train services more efficient as not only as they are modern, with better capability, but also offer more safety and speed,” said SRT’s Public Relations Chief Ekkarat Sri-Arayanphong.

The fleet will help the SRT to generate more revenue and improve the potential of rail transport in Thailand, Ekkarat added.

Ultraman’s next scheduled test run will take place on May 9 from Chon Buri’s Sri Racha Junction to the Inland Container Depot in Bangkok’s Lat Krabang district.

The train is named after fictional Japanese superhero “Ultraman”, who wears red and grey and comes from a technologically advanced civilisation.