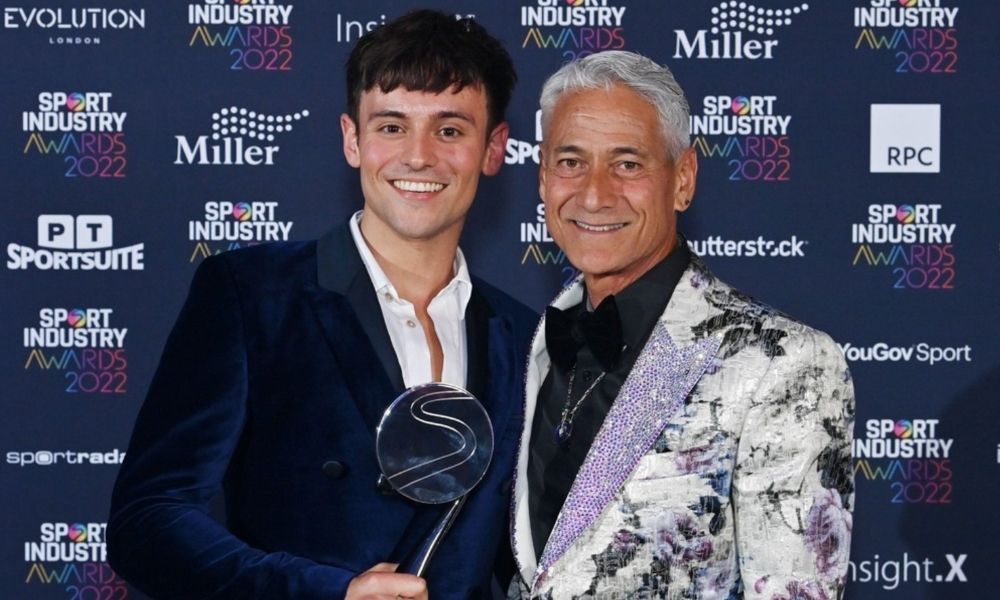 The best and brightest of the sport industry reunited in London yesterday for the 21st edition of the Sport Industry Awards. Held under the roof of a sold-out Evolution London, 1,500 sport industry professionals and athletes came together to celebrate and showcase the outstanding work and achievements of the sector in the last year.

Hosted by sports presenter Laura Woods and TV personality Mark Durden-Smith, the star-studded ceremony saw Tom Daley OBE walk away with the Outstanding Contribution to Sport Award, following his gold medal in the Tokyo 2020 Olympic Games. While human rights lawyer Kat Craig received the Integrity and Impact Award in Association with InsightX, for her role in the evacuation of the Afghan Women’s National football team from Kabul last year.

On receiving the prestigious award, Daley, who was presented his award by fellow Olympic gold medallist and friend Greg Louganis, said, “Not only to receive this award but to have it be presented to me by my childhood hero, was so surreal. Greg has been such a massive influence in my diving career.

“I have seen so many people receive The Outstanding Contribution to Sport Award over the years and it is so incredible. I was here for the first time when I was 12 years old and to now have one of these myself is overwhelming.”

Daley became the fifth recipient of the award, following on from Manchester United player Marcus Rashford for work he has done in fighting for those less fortunate, US gymnast Rachel Denhollander for speaking out against her abuser Larry Nasser, Manchester City’s Raheem Sterling for his work fighting racism in football, and the USWNT’s Megan Rapinoe for her uniting voice amid a divisive America and her continued action for the LGBTQ+ community.

The night began with the Integrity & Impact Award in association with InsightX, awarded to Athlead founder and CEO, Craig, by Tanni Grey-Thompson.

Craig accepted the award on behalf of a number of individuals and organisations who were instrumental in the evacuation of the Afghan Women’s National football team and other vulnerable female athletes from Kabul in the autumn of 2021.

On receiving the award, Craig, said, “I’m really grateful to have this opportunity to pay tribute to the incredible group of people who came together. But more than anything, it was the players who were forced to run a gauntlet of Taliban checkpoints and crowd crushes to make it to the airport. It was the players who we asked to make the impossible choice – to stay and die or leave their families behind while their country burned. They saved themselves, and this award, more than anything, is for them.

And it is important to recognise all that courage and that togetherness because it shows us as an industry that – off the pitch as much as on it – it takes a team to make change happen.”

A theme of ‘togetherness’ was ongoing throughout the awards and nowhere was this more evident than when Sport Industry Group chairman Nick Keller announced the launch of the Sport Together Fund.

Established by Sport Industry Group’s sister organisation and global charity Beyond Sport, Keller explained that, although the immediate focus of the Sport Together Fund is to support the needs of Ukrainian refugees, the long-term aim of the fund is to bring the sport industry together to help communities around the world and to better inform the industry about the positive role it can play in times of crisis.

On announcing the Sport Together Fund, Keller said, “When we come together as an industry, we can affect great change upon the world, but we must be unified in our action. When we use sport with intention, we can offer hope, transform lives and rebuild communities from the roots up.

Gathered here tonight, surrounded by friends and colleagues, I know that together we have the power to make a difference.”

The England and Wales Cricket Board (ECB) was the big winner on the night, taking home two awards. The Hundred, the ECB’s short-form cricket competition which launched in 2021, won Event of the Year in association with Miller, while it’s ticketing strategy, which successful brought a diverse new audience to the competition’s inaugural season, was further rewarded with the Data & Insights Award in association with Sportradar.

Toyota GB picked up the Brand of the Year Award in association with RPC for its sponsorship activation of the Olympic & Paralympic Games and Team GB. Meanwhile the British Paralympic Association’s Parasport Powered by Toyota, a hub designed to highlight grassroots accessible sport and physical activity in the UK, took home the Active & Wellbeing Award.

Elsewhere, Premier League football club Brentford FC was praised for an outstanding year on and off the pitch and, as such, won the Sport Organisation of the Year in association with egoli Media.

In a closely contested category, Two Circles won Agency of the Year, in part for its work on The Hundred, while London-based sports and entertainment marketing agency The Space Between was the deserved winner of Young Agency of the Year.