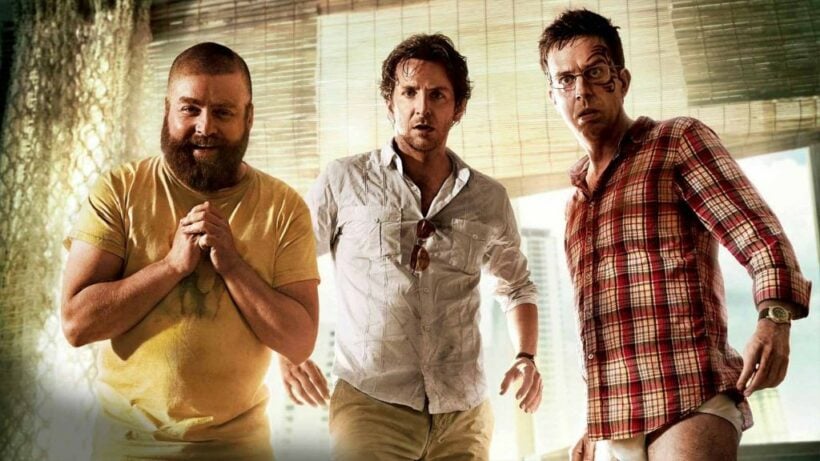 Thailand is active in attracting foreign movie makers, and has been for decades. Many well known movies have been either partially or totally filmed in Thailand. From ‘The Killing Fields’ to ‘Around the World in 80 Days’ and the latest in the ‘Fast & Furious’ franchise (around Krabi).

Some of Thailand’s scenery is unique and the film crews are well known as fast and innovative with plenty of highly trained crews available to compliment any international production. And it’s usually warm too.

Here is our list of the Top 10 English-language movies that were at least partly made in Thailand, in no particular order. There’s also some excellent Thai-language films made in Thailand in one of the most prolific film industries in the world. But that’s a list for another day.

A Colin Firth movie made partly in Thailand (also ‘Bridget Jones – The Edge of Reason’, 2004), ‘The Railway Man’ is a 2013 British–Australian war film directed by Jonathan Teplitzky. The movie also starred Nicole Kidman, Jeremy Irvine, and Stellan Skarsgård. The movie follows a tortured soul and his traumas as an ex-POW who was interred and tortured by Japanese troops in camps around the Thai Burmese border. He returns later in life to Thailand confront his demons.

From ‘The Telegraph’… “One of the most striking things about the terrain through which the “Death Railway” linking Thailand to Burma passed, is its extraordinary beauty. Much of the scenery is classically south-east Asian: lush and tropical, fringed with rugged, mountainous mystery. It is the stuff of travellers’ dreams. But as ‘The Railway Man’, the latest film to throw light on one of history’s darker chapters reveals, it is also the stuff of nightmares”.

Hardly high art but a successful sequel to the original ‘Hangover’ starring Bradley Cooper, Ed Helms, Zach Galifianakis, Ken Jeong. The film was filmed almost entirely in Bangkok and around Phang Nga Bay including Phulay Bay, A Ritz-Carlton in Krabi.

The film gives you the impression that you turn left in Bangkok, travel an hour or so, and arrive in Phang Nga Bay. Also the unlikely situation where you jump on a speedboat in Bangkok and arrive in Krabi on one tank of fuel! The reality is you would have to travel all the way south, around Singapore and then north through the Malaca Straits, a journey of three or four days!

The plot… well, anything and everything goes wrong! Tattoos, ladyboys, monkeys, drugs, kidnapping, car chases, fingers chopped off. That’s about it.

In 2011 an Australian stuntman who was injured whilst filming in Bangkok sued Warner Bros. The case was settled out of court for an undisclosed sum. The film had a budget of US$80 million but returned nearly $600 million.

‘Good Morning, Vietnam’ is a 1987 American military comedy-drama film written by Mitch Markowitz and directed by Barry Levinson. The movie is set in Saigon in 1965, during the Vietnam War. The movie was a major star-vehicle for Robin Williams as radio DJ Adrian Cronauer on Armed Forces Radio Service.

Plot, briefly… man becomes DJ on official military radio station in Saigon. DJ is widely popular with the US troops but very unpopular with some of the military bosses. Man meets woman, man falls for woman, woman’s brother is a Viet Cong pimp.

The film is famous for Williams’ radio broadcast scenes which were largely improvised. It was a critical and commercial success; for his work in the film, Williams won a Golden Globe Award for Best Actor – Motion Picture Musical or Comedy and was nominated for an Academy Award for Best Actor. ‘Good Morning, Vietnam’ was one of the most successful films of the year, becoming the fourth highest-grossing film of 1987.

The film was shot almost entirely in Bangkok.

We throw these two Bond films into the same posting but extensive sequences in both were filmed in and around Phang Nga Bay in Southern Thailand. Ko Tapu, a limestone monolith standing all by itself, has become a major tourist attraction in the Bay and has even been renamed James Bond Island in honour of it’s backdrop performance in the Roger Moore ‘Man with the Golden Gun’. Probably one of the most boring of the Bond franchises but, hey, it spawned a whole new tourism attraction for the region!

‘Tomorrow Never Dies’ was the 18th James Bond film, this time with Pierce Brosnan with a license to kill. The Ho Chi Minh City scenes were shot in Bangkok and Phang Nga Bay, pretending it was some other asian location.

It is the third and final film in Stone’s Vietnam War trilogy, which also includes ‘Platoon’ and ‘Born on the Fourth of July’. The film was shot in Thailand as the Vietnamese government had decided Oliver Stone liked to depict their country in a negative light (it took them Stone’s two other films to figure that out). Town shots are filmed around Old Phuket Town and many of the wider shots of open paddocks and fields were filmed around Krabi.

The film was based on the books ‘When Heaven and Earth Changed Places’ and ‘Child of War’, ‘Woman of Peace’, which Le Ly Hayslip wrote about her experiences during and after the Vietnam War.

It was a box office flop earning only $5.9 million on a budget of $33 million.

‘Air America’ was a 1990 American action comedy directed by Roger Spottiswoode with Mel Gibson and Robert Downey Jr. as Air America pilots flying missions in Laos during the Vietnam War. All the ‘Laos’ shots were shot in Thailand.

Plot: When the protagonists discover their aircraft is being used by government agents to smuggle heroin, they must avoid being framed as the drug-smugglers.

Budgeted at $35 million, the production involved 500 crew shooting in 49 different locations in Thailand, London, and Los Angeles. Principal photography began on October 3, 1989 and ran for five months but the crew were called back six months later to film a new ending.

The producers rented 26 aircraft from the Thai military, although some of the stunt flyers refused to perform some of the stunts, with 60-year-old veterans being drafted for some of the more nuanced aerial shots. Sidenote: PepsiCo wanted the filmmakers to use a fictional soda rather than show opium being refined at their abandoned factory.

Not only a film made mostly in Thailand but also an Academy Award winner and a fitting story of the so-called Asian holocaust – the reign of terror by the Khmer Rouge in Cambodia between 1975 and 1979 where up to 2.5 million citizens were systematically starved, over-worked or killed.

At the 57th Academy Awards it received eight Oscar nominations; including Best Picture. It won three, most notably Best Supporting Actor for Haing S. Ngor, who had had no previous acting experience. Directer Roland Joffé said, of Haing S. Ngor’s performance… “Haing had been acting his whole life – you had to be a pretty good actor to survive the Khmer Rouge”.

From Roland Joffé… “We shot those scenes in the countryside outside Bangkok. Lots of very realistic looking corpses had been laid out. It was all very disturbing: you’d get a crawling feeling up your back during shooting. And there was a real panic when a farmer’s wife went out early in the morning and got a total shock when she saw them, poor woman”.

The Beach is a 2000 British-American adventure drama film directed by Danny Boyle and based on the 1996 novel of the same name by Alex Garland. The film stars Leonardo DiCaprio, Tilda Swinton, Virginie Ledoyen, Guillaume Canet and, Robert Carlyle. It was partly filmed around Phuket Town and Koh Phi Phi Leh.

Producers got a lot of heat for bulldozing and landscaping sections of Ko Phi Phi Leh beach to make it more “paradise-like” including clearing some of the coconut trees and grass. Local environmentalists weren’t going to put up with that!

The lawsuits dragged on for years. In 2006, Thailand’s Supreme Court upheld an appellate court ruling that the filming had harmed the environment and ordered that damage assessments be made. Producers had made an allowance for repairing any damage but the 2004 Asian tsunami did its own ‘alteration’ of the beach.

The crappy old On On Hotel in Phuket Town, depicted in the movie, has had a major make-over since and now a very swish boutique hotel worth visiting anytime.

Did You Know? Ewan McGregor was cast as the main character before leaving due to disputes with the director. It was speculated that Director Danny Boyle was offered additional funding under the condition that DiCaprio be cast and his British character turned into an American (would have been more fun to hear Leonardo doing a British accent).

A grand Hollywood epic and a personal passion project for the, then, Mr Elizabeth Taylor, Michael Todd. The epic picture was directed by Michael Anderson and produced by Mike Todd’s company who financed the film by selling his Todd-AO 70mm film format. Admittedly, if you blinked, you’d miss the portions of the movie filmed in Thailand. A 2004 version, starring Steve Coogan and Jackie Chan, had segments also filmed in Thailand, posing as a Chinese village. It was a flop. Here’s an excerpt from Wikipedia about the original 1956 production…

Filming took place in late 1955, from August 9 to December 20. The crew worked fast (75 actual days of filming). The picture cost just under $6 million to make, employing 112 locations in 13 countries and 140 sets. Todd said he and the crew visited every country portrayed in the picture, including England, France, India, Spain, Thailand and Japan.

Shot in 2012 and directed by Juan Antonio Bayona. Hard to leave out this one out as the story was about Phuket, Khao Lak and the Andaman Sea’s largest natural disaster – the Asian tsunami of 2004. The story revolves around a British family staying in Khao Lak for their Christmas holidays. The movie starred Ewan McGregor and Naomi Watts. Many Phuket extras were enlisted as extras for the movie. If we had one criticism about this film it would be the focus on the single family whilst the disaster killed up to 250,000 who were never referred to in the film.

The ‘Blink and you’ll miss it’ Award

Shot in 2005, directed by George Lucas, the finale of the original six Star Wars episodes. There were a few scenes filmed around Krabi Province to represent the Wookie home planet ‘Kaashyyk’. By the time the CGI crew got their hands on the original footage you’d be hard pressed to recognise the scenery.

A 2004 sequel of ‘Bridget Jones’s Diary’ and directed by Beeban Kidron that reunites the same cast members: Renée Zellweger as Bridget Jones, Colin Firth as Mark Darcy, and Hugh Grant as Daniel Cleaver. This time, the movie’s plot takes them to Bangkok (some scenes were shot along the infamous Soi Cowboy), to Phuket International Airport, Nai Yang Beach, and Panyee Island in Phang Nga Bay.

An exhaustive list of big movies made mostly or partly in Thailand, HERE.

So tell us what your favourites are, either partially or totally made in Thailand? Join Thaiger Talk