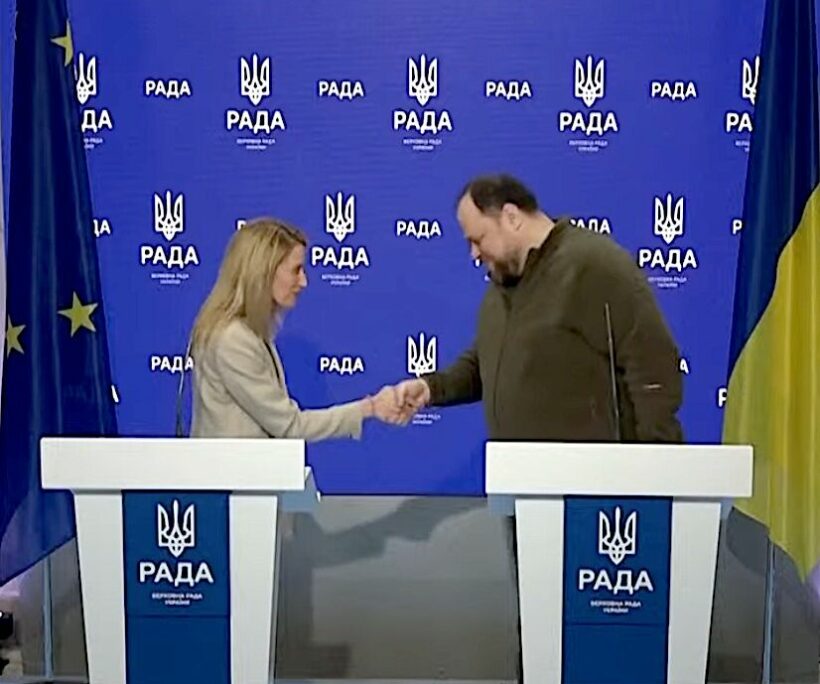 As Russia’s invasion of Ukraine enters the month of April, here’s the latest headlines…

“I sincerely want to thank you personally, Roberta, and your entire team for being here at such an important moment for our state. Today is an important moment when Ukrainians believe in deeds and concrete steps. At this moment, you are showing heroism. Now it is heroic to come to Ukraine.”

• Russian forces have prevented aid supplies from reaching the besieged city of Mariupol in southern Ukraine, and trapped residents still find leaving the city highly difficult. That’s according to Petro Andriushchenko, an adviser to the city’s mayor, who on Friday posted a statement on Telegram saying…

“The city remains closed to entry and very dangerous to exit with own vehicle. In addition, since yesterday, the occupiers (Russians) have categorically not allowed any humanitarian aid, even the smallest amount, into the city… The reasons for such actions are still unclear, but our predictions remain frustrated. We do not see a real desire of the Russians and their satellites to allow Mariupol residents to evacuate to Ukrainian-controlled territory.”

• Earlier, French and German leaders had requested for Russia to open evacuation corridors for residents trapped in the city. In response, Russian forces said they would open an “evacuation corridor” from the besieged city of Mariupol to Zaporizhzhia on Friday. Local officials say more than a hundred thousand civilians remain trapped in the southern port city.

• According to the Red Cross, both Ukrainian and Russian authorities have agreed to a plan to allow for more evacuations from Mariupol. But evacuation attempts were largely frustrated on Friday, with only 2,000 people able to board buses bound for the Ukrainian held city of Zaporizhzhia. Tens of thousands of civilians remain trapped in the devastated city, which has been pulverized by Russian shelling and bombing. The Red Cross said it will attempt to evacuate more civilians on Saturday.

• A Ukrainian minister says Russian forces have confiscated 14 tons of humanitarian aid from a convoy of evacuation buses that were stopped at a Russian checkpoint. They were on the way to Mariupol.

• In a rare display of internal dissent, Ukraine’s Zelensky said he has sacked two unpatriotic generals for being “antiheroes.” But he did not give details.

• NATO’s chief has warned that Russian forces are not withdrawing, as claimed. Rather, they are repositioning while keeping pressure on Kyiv and other cities. Both Ukrainian and US officials have said that Russian forces may be attempting to regroup in Belarus. In the region of Donbass, Russian forces have intensified their shelling as the military appears to have shifted its focus on the east, while regrouping its forces around the capital.

• Russia has claimed that Ukrainian helicopters have attacked an oil depot in the Russian territory of Belgorod. Video footage shows fuel tanks on fire. The alleged strikes do not create “comfortable conditions” for peace talks, according to Russian Foreign Minister Sergei Lavrov. Ukrainian officials said they can neither confirm nor deny the attacks. It comes after Ukrainian forces began launching successful counterattacks to repel Russian forces from around major cities.

• Elsewhere, Ukrainian forces are gaining ground around Kherson, the only major city captured by Russian forces.

• Meanwhile, Russia’s foreign minister is in India, where he has said he appreciates the country’s response to the war. A longtime friend of Russia, India has so far remained neutral and not condemned Russia’s invasion of Ukraine, though many independent media outlets in the country have.

• In their daily update on the war in Ukraine, the Institute for the Study of War, a US war analysis think tank, has warned Ukraine not to accept a potential ceasefire offer from Russia, which actually may lead to more war, saying…

Ukraine may soon face a new threat in this war—Russia’s ceasefire offer. It seems odd to say that a ceasefire is a threat. Once war begins, the default position in the West is to seize the earliest opportunity to “stop the fighting.” But while some ceasefires lead to peace, others lead to more war—as the Russians have repeatedly shown. The frontlines frozen in a ceasefire set the conditions for the negotiations and reconstruction that follow. They also set conditions for future conflict. Those seeking enduring peace in Ukraine must resist the temptation to accept a Russian ceasefire offer that sets conditions for renewed conflict on Russia’s terms or gives Russia leverage on Ukraine with which to force concessions and surrenders.

GRAPHICS: Institute for the Study of War