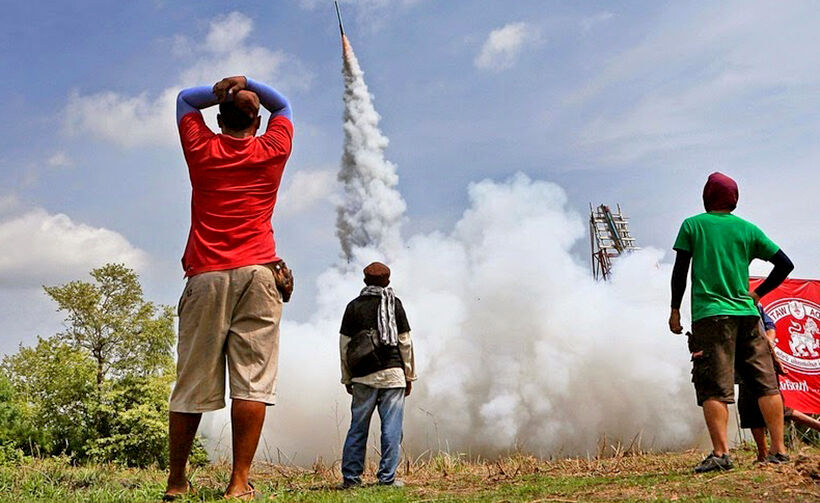 Look up! Rockets, made from cheap PVC plumbing pipe roaring into the skies, parades featuring cross dressers and phallic symbols, mud fests, all fuelled by rice wine and other local brews (many as potent as the whatever-it-is used to launch the rockets). Yes, it’s time for the annual Rocket Festival or Bun Bang Fai, held in May, mostly in Thailand’s north east. When it comes to ‘TIT’ (This Is Thailand), it doesn’t get much more TIT than this.

It’s time for the north east to welcome in the wet season and pay homage to Phaya Taen, the god of rain, by penetrating the skies over Isaan with home made rockets that are the pride of the villages and communities that make them.

The spectacle attracts over 50,000 visitors every year. Now, just like the Songkran festival, there’s even an international dimension creeping into the Bun Bang Fai, with teams coming from Laos, Cambodia, South Korea and Japan competing for the best, highest, fastest and ‘most beautiful’ rocket categories. Sexual innuendo abounds.

As soon as each Bun Bang Fai festival is over, the participants pick up the remnants of their entry, which may have launched high into the sky, or not at all. And the work begins on next year’s entry. Secret meetings are held, unique designs are conceived, cunning plans are devised and the construction begins.

The weekly get-togethers are as much a part of the ritual as the ‘launch’ events. This year, Bun Bang Fai is held between May 13 – 15, roughly coinciding with the start of the wet season. If the sky rain gods needed any reminding, THIS event will wake them up!

Apart from welcoming in the season’s rain, the festival also aims to ensure a pest-free harvest, no flooding and no droughts. Over the years there’s been pests, flooding, drought and, occasionally, plenty of rain as well. So the festival’s effectiveness, as a method of controlling the weather, could be called into question. But the science of meteorology is not what the rocket festival is about.

The rockets are lovingly crafted of bamboo, cardboard, PVC pipe and wood and fuelled with gunpowder (or something closely approximating gunpowder). Some are small and effective. Others make up for engineering and explosive efficiency with brute size, where only the brave care to light these from close quarters. Some of them weigh 100 kilograms, fully loaded.

The average rocket measures around 9 metres containing some 25 kilograms of gunpowder. But some carry as little as 1 kilogram of gunpowder whilst the beastly Bung Fai Saen rockets could weigh up to120 kilograms.

The lovingly prepared rockets are first mounted onto large floats and paraded down the local streets with a rocket parade (some suggest this is where Kim Jong-un got the idea… but we might have made that up). The idea is to invoke rocket-envy, along with plenty of trash-talking and betting. The rockets are accompanied with locals wearing traditional costumes and loud music. And rice wine.

Eventually all roads lead to the rocket launch area, usually located far enough away from the local airport and with enough space for the take offs and slightly-less-organised landings. There are food stalls, bands (loud of course) and plenty of consumable liquid ‘rocket fuel’.

The higher the rockets fly into the sky, the better the weather for the upcoming season. But woe betide the teams whose rocket gets performance anxiety and doesn’t, well, launch, let alone ‘penetrate’ the sky! The teams end up in a specially prepared pool of mud, along with their rocket.

To be clear, the mixture of poorly qualified rocket engineers, gunpowder, alcohol and cross dressers doesn’t always end up well. There is the occasional lost finger, hand, or life. Injuries are not uncommon. Suffice to say, it’s best for the spectators to keep a safe distance. And keep your eye on the damn things when they head up into the sky because some DO reach a few kilometres and no one really knows where they’re going to land. Remember, what goes up, must come down, somewhere.

And now time for the potted history.

The fertility rituals form the basis for the Rocket Festival and goes back as far as the pre-Buddhist Siam. The actual rockets were introduced even earlier in the 9th century after the arrival of gunpowder in Southeast Asia.

When the god of rain, Phaya Taen, became upset, he prevented the rains from falling for 7 years. Phaya Khang Khok (Toad King) another Buddhist mythological figure went to war with Phaya Taen. When Phaya Taen eventually prevailed, peace and prosperity fell across the land. The Rocket Festivals are to remind Phaya Taen about his promise to bless the earth with rain.

The Rocket Festival was traditionally practised by ethnic Lao people throughout Thailand’s north east as well as in Laos. The most famous rocket festival is in Yasothon, capital of the Yasothon province. Other famous rocket festivals in Isaan are in Nong Khai, Sisaket, Kalasin, Roi Et and Maha Sarakham.

Celebrations usually last about three days from Friday night to Sunday night, just before the planting season. In Yasathon, it’s usually during the second weekend of May. The Sunday is usually the rocket launching day following the parades and the parties on the Friday night and Saturday.

Anyone got a match?!

Check out the real deal here with Tim Newton…