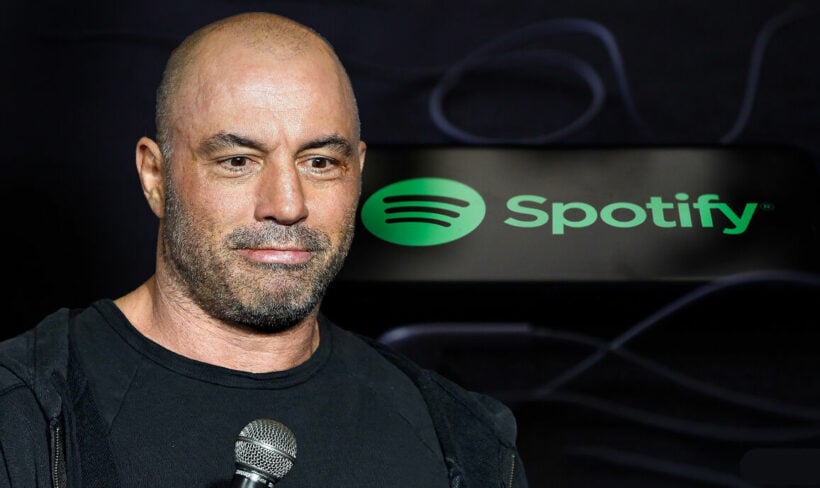 Streaming service Spotify has now removed 113 episodes of the highly popular Joe Rogan Experience from its platform. It follows an apology from Joe Rogan, for using racial slurs on his podcasts and comes just 2 weeks after another controversy regarding criticism of apparently misleading Covid-19 guests and conversations.

The Instagram apology isn’t directly related to the mounting criticism over some of his program’s misleading claims about Covid 19 and various treatments.

In the latest fracas, Joe Rogan apologised for using the ‘N-word’ on his show in past episodes. He specifically addressed a clip shared by singer India Arie that edits Rogan using the N-word repeatedly during podcast episodes.

The comedian, MC and commentator has come to greater public scrutiny in recent weeks after a boycott by veteran artists like Neil Young and Joni Mitchell, for spreading Covid-19 misinformation.

The total of episodes taken down comes from a website that tracks episodes of the Joe Rogan Experience that have been removed from Spotify.

All but one of the episodes were recorded before the covid pandemic kicked off, although the most controversy over his podcasts has been liked to spurious claims by people in the medical and health profession that have been deemed as dangerous or misinformation.

Spotify have not made any specific comments about the controversial Joe Rogan podcasts but appear to have taken definitive action to clean up their platform under the mounting criticism.

A week ago Joe Rogan made a clip explaining his side of the swirling controversy.

Firstly it was musician Neil Young, then Joni Mitchell, who said they were taking their music off Spotify in protest to misinformation spread about Covid-19 by the Joe Rogan Experience.

Now they’re being joined by other podcasters and musicians complaining that the popular Rogan podcast is spreading “misleading and inaccurate claims” about vaccines and Covid-19.

Spotify has responded by saying that it’s now adding a content advisory to any podcast episode that includes discussion about Covid-19. The advisory will now direct Spotify listeners to a “Covid-19 hub” that will include links to trusted sources, according to the company. But they’ve been silent about their podcast star and his weekly podcast.

Joe Rogan made a video on Instagram today on his thoughts on the controversy with Spotify. He says the podcast has been accused of spreading dangerous information, specifically about two episodes – one with cardiologist Dr. Peter McCullough and the other with virologist Dr. Robert Malone. Rogan backed up both of the doctors’ credentials and said he wanted to hear opinions that are different from the mainstream narrative. You can check out the video HERE.

Spotify says they are also going to publicly post their long-standing Platform Rules, hitherto unpublished, in hopes it will clarify for all content producers guidelines for future material.

“These are rules of the road to guide all of our creators.”

CEO and co-founder of Spotify, Daniel Ek, says the company is taking seriously the response from well-respected artists like Young and Mitchell, along with the growing protest from other content providers.

But just two days after the ultimatum, Spotify started removing the 76 year old’s classics, including his best-known hits “Heart of Gold,” “Harvest Moon,” and “Rockin’ in the Free World.”

Even the popularity and respect for seasoned multi-Grammy winners like Neil Young and Joni Mitchell, is no match for the sheer size of Joe Rogan’s Spotify audience – an estimated 10 million+ listers per episode. A week ago Young drew a line in the sand over the misleading Covid information and guests, left unchallenged on Rogan’s program.

“They can have Rogan or Young. Not both.”

On May, 2020, Rogan announced that from September that year, The Joe Rogan Experience would be available on Spotify in an exclusive licensing deal valued at an estimated US$100 million. Uploads of full episodes to his original platform-of-choice, YouTube, continued until December 2020, then the program was exclusive to Spotify only. Buthighlight clips and snippets are still uploaded to YouTube.

John Simson, director for the business and entertainment program at American University, says it all comes down to business and has nothing to do with art or the artists.

“In the music side of things, Spotify is paying out roughly 70% of all the revenue that comes in. It goes right back out as royalties. They’re looking for other places where the revenue split isn’t that dramatic. Podcasts were certainly their go-to.”

There have been ongoing spats between, mostly, musicians and Spotify. Last year, rapper T-Pain shared a breakdown of how many Spotify streams it would take for a musician to make US$1, pointing out that on Spotify it takes 315 downloads. Apple Music takes around 128 downloads to make the same dollar.

Meanwhile Neil Young is doubling down.

“I sincerely hope that other artists and record companies will move off the Spotify platform and stop supporting Spotify’s deadly misinformation about Covid.”

Whether any more musicians or podcasters will follow is yet to be seen. Especially artists with enough popularity or clout to make Spotify stand up and take notice.

For now Spotify is backing their most popular podcaster whilst hoping their plan to publish content guidelines may be enough to make the problem go away.

We’ll leave the last word to Neil Young from ‘Leave The Driving’….

“And as an afterthought, this too must be told: Some people have taken pure bullshit and turned it into gold.”