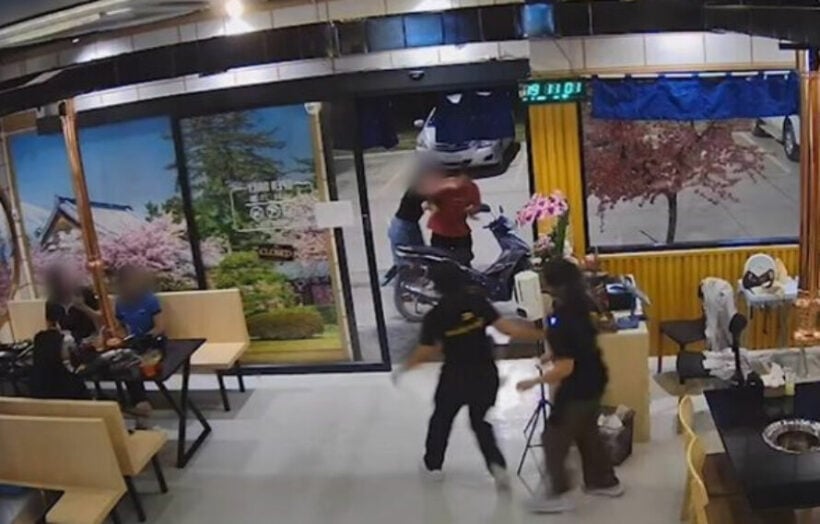 A Thai man snuck into a women’s public bathroom in Chachoengsao province, eastern Thailand, on Sunday and secretly filmed a woman while she was in the cubicle. He picked on the wrong woman, as it turns out the victim has a black belt in Taekwondo. The whole incident was captured by CCTV.

The 28 year old woman, Ms. A (pseudonym) saw the perpetrator’s phone poking over the top of the cubicle, so she chased him outside, recognising him from his shoes. He straddled his motorbike and tried to get away, but he was too slow.

Ms. A thoroughly beat him up, swinging punches and delivering kicks left right and centre. At one point, he knocks her down, but she does a backward roll and is straight back on her feet.

Ms. A ran into the Japanese restaurant where she works to get back up. He stops on his motorbike and asks who it was that attacked him. The victim launches more punches and snatches his phone, finding the evidence that he filmed her in the bathroom. She showed the clip to her colleagues and then deleted it.

The victim said she was so angry at the young man’s behaviour and just saw red. Ms. A told the media that she has a black belt in Taekwondo. She said she used to represent the district and has won many gold medals for her skills in martial arts, which she started learning when she was seven years old.

The 17 year old perpetrator, with a ripped shirt, told the victim he had been drinking beer and only filmed her because he was feeling “drunk and reckless.” Wearing a hat over his face to hide his identity, he spoke to the media, publicly apologising for what he did.

Ms. A wants to warn women to be careful and on the lookout for perverts in public bathrooms.