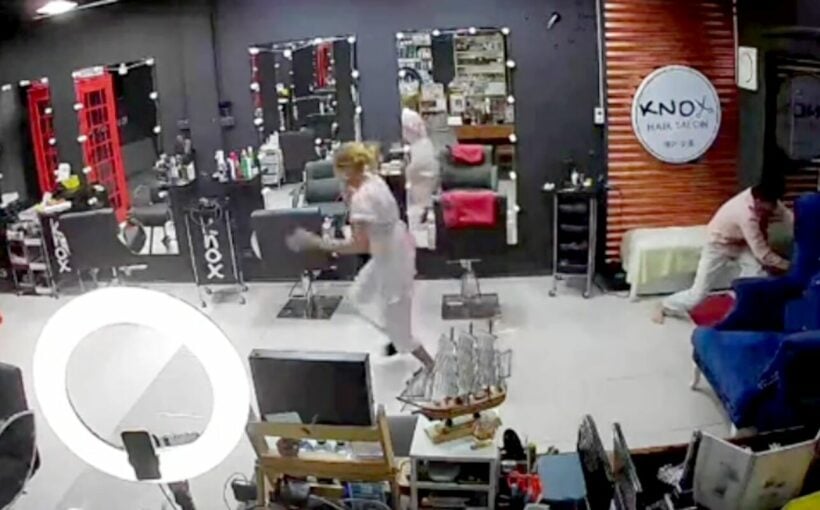 A shocking video has gone viral on Thai social media showing the moments just after an alleged jealous lover splashed acid on a woman’s face outside of the salon where she worked. The security camera video shows a startled shopkeeper rushing to open the door followed by the woman running blindly across the shop screaming and stumbling as she lunges into the bathroom to rinse the chemicals.

The incident took place in the Don Mueang area of Bangkok yesterday. Thai media is reporting that the person responsible for dowsing her on the street with the acid was her lover and reports that the two live together. They are reportedly not legally married but do have a child together.

Don Mueang Police are seeking the woman’s lover as the prime suspect in the attack, and the police chief says that the perpetrator will be charged with assault at a minimum. Once the woman has been fully treated for her injuries, police will assess the damage and may impose further charges.

The woman is receiving care at Phra Nang Klao Hospital and has yet to give an official statement or information to the police to pursue the assailant. Police will continue the investigation and the hunt for the attacker, and are treating it as a case of domestic jealousy.

Users on TikTok viewed the video in shock with many commenting asking about the condition of the woman after the acid attack. The shop owner said that her life was safe, but her symptoms were still very serious. Other users called for a ban or tighter regulation on liquid assets that could be used to disfigure someone.

People also suggested the proper way to deal with acid on your skin, saying that rushing to rinse it with water and scrub it clean is harmful. The water mixing with the chemicals can spread the acid further on your skin, so someone affected should first blot out and absorb as much as possible with a clean cloth or paper. Then the skin should be rinsed with large quantities of water, but not rubbed or scrubbed as this will peel the affected skin off.

The video posted to TikTok right after the acid attack can be seen via the Daily News Online: