For all the woe surrounding New Zealand’s unprecedented losses in 2022, it could take just one win over long-time foe Australia to start turning perceptions of the All Blacks around.

Everything seems to be stacked in favor of the All Blacks ahead of Thursday’s Test in Melbourne, where a win would extend their trans-Tasman rugby superiority streak to 20 years and likely keep them atop the Rugby Championship standings.

They’re coming off an emphatic 53-3 win over Argentina, while the Australians are coming off a thumping 24-8 defeat to World Cup champion South Africa.

The All Blacks have a settled squad; the Wallabies have made eight changes to their starting lineup, including Bernard Foley returning for the first time since 2019 as the Australian team’s fourth starting flyhalf of the season.

Even the perceived disadvantage of the ‘away’ factor is reduced for the All Blacks because of the venue. 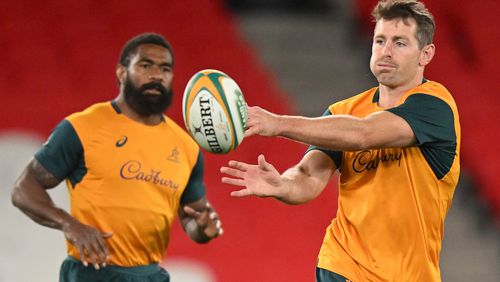 Melbourne is the heartland of the homegrown Aussie rules brand of football and rugby is a significantly lesser local consideration at AFL playoffs time — reducing home ground advantage for the Wallabies.

The All Blacks haven’t lost a Bledisloe Cup series since 2002, although that’s a stat that could make them a little bit nervous after losing four of their seven Tests this year.

As All Blacks winger Caleb Clarke said: “We don’t want to be that team to lose it… so it means a lot for all of us.”

The All Blacks haven’t managed to put back-to-back wins together in a stop-start season, although they have managed to enter the Bledisloe Cup phase of the Rugby Championship in top spot in the tournament.

In July, the New Zealanders lost a series at home to Ireland for the first time, with defeats in the second and third Tests.

They opened the Rugby Championship with a loss in South Africa, before recovering to beat the Springboks.

Then they went down to Argentina on home soil for the first time before rebounding with a seven try blitz of the Pumas.

Ian Foster’s job as New Zealand head coach has been under constant scrutiny through all this, adding to his determination to clinch the Bledisloe Cup before the return match is played in Auckland on September 24.

“The fact we’ve held it for a while is nice but kind of irrelevant right now,” he said.

“It’s about the here and now, and there would be nothing better than to lock that away on Thursday night.” 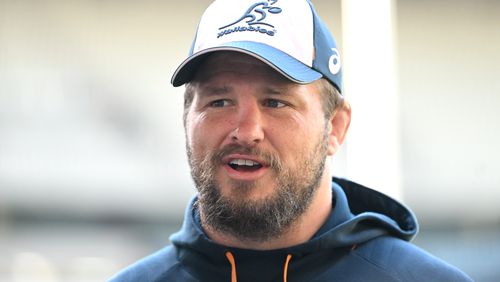 James Slipper will again lead the Wallabies in the absence of Michael Hooper, who hasn’t played since Australia’s series loss to England in July.

The 33-year-old Slipper has played 121 Tests for Australia but never won the Bledisloe Cup.

He’s not buying into the theory that the All Blacks are extra vulnerable after such dramatic highs and lows this season.

“I’ve heard that commentary a fair bit but history tells us they’re a pretty hard team to beat,” Slipper said.

But he took the chance to dial up the internal pressure on the New Zealanders.

“Yes, they’re a good team, a big rugby nation and there’s a lot of pressure on their outcome,” he said.

“They’re a team that has a whole country behind them who wants to see them win.”

The All Blacks made two enforced changes, with backrowers Ardie Savea and Shannon Frizell unavailable for selection.

Foster picked Hoskins Sotutu to start at No.8 for the first time this year and moved Scott Barrett from lock to the blindside flank to make way for the return of Brodie Retallick in the second row. 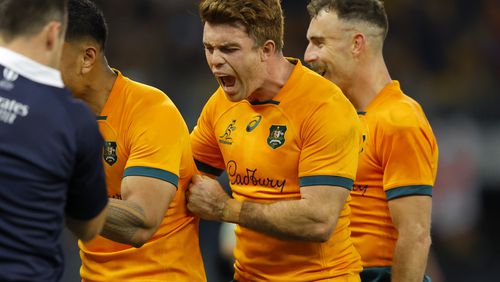 Wallabies coach Dave Rennie reworked the backrow and the backline, with Andrew Kellaway returning at fullback and Jake Gordon getting his first start of the year at scrumhalf in a new combination with 33-year-old, 71 Test veteran Foley.

“It’s been the kind of tale of our season so far. We’ve gone through quite a few players,” Slipper said.

“It’s kind of that next-man-in sort of attitude. (Foley has) come in really well. He’s been a big voice in our group this week and I’m excited to see him don the jersey again.”