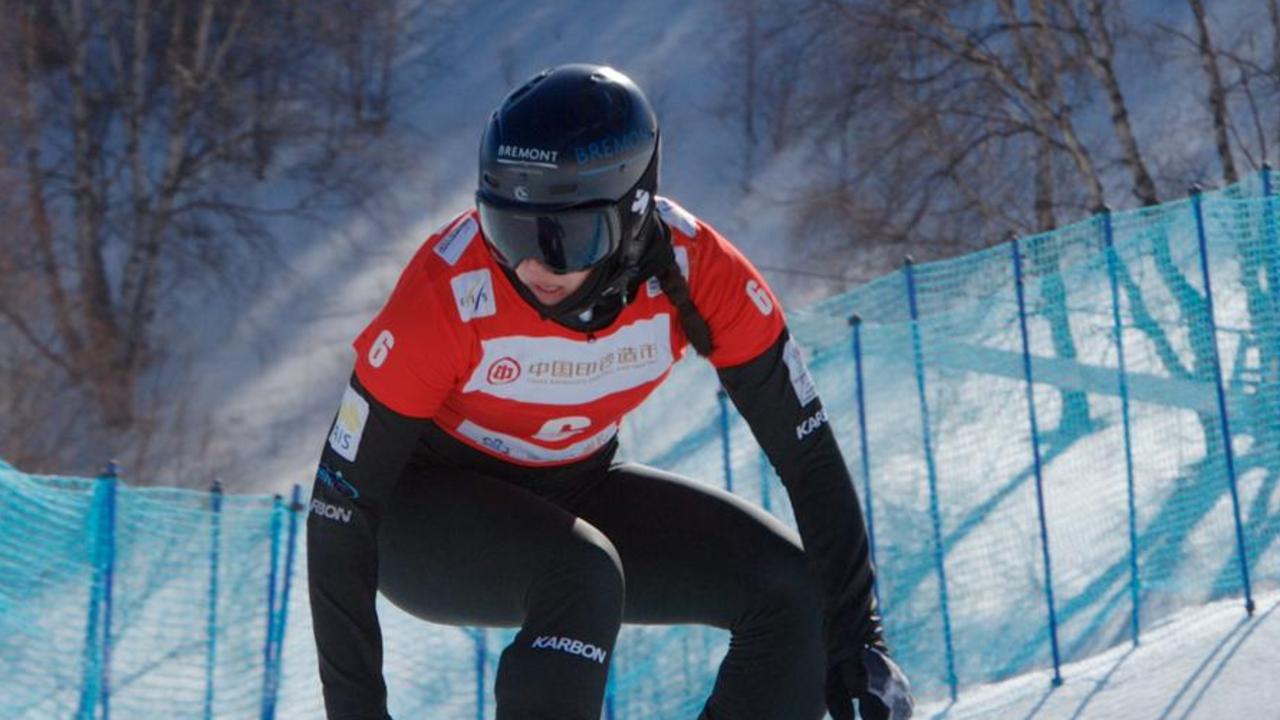 Disaster has struck at the Winter Olympics as the two Australian teams in the same snowboard heat collided to end their medal hopes. FOLLOW ALL THE WINTER OLYMPICS LATEST

Australia’s hopes of setting a new Winter Olympics record in the team snowboard cross are over.

In a disastrous outcome, Aussie riders Josie Baff and Belle Brockhoff collided on the second run of their heat, allowing Switzerland and the USA to progress to the semi-finals.

Brockhoff and Cam Bolton were on track to finish second behind the American pair before Brockhoff and Baff’s incident ended their dream.

Brockhoff has been tended to by medical crews for several minutes which has delayed the event.

An athlete has staged the first political protest of the Winter Olympics in Beijing, holding up a sign reading “no war in Ukraine”.

Vladyslav Heraskevych, a Ukrainian competitor in the skeleton bobsled, showed the sign briefly to television cameras after completing a run.

The words were printed on a piece of paper with the colours of the Ukrainian flag.

“It’s my position. Like any normal people, I don’t want war,” Heraskevych, 23, said after he finished competing, according to the Associated Press.

Russia has amassed about 130,000 troops near its border with Ukraine but denies planning to invade.

Rule 50 of the Olympic charter states that “no kind of demonstration or political, religious or racial propaganda is permitted in any Olympic sites, venues or other areas”.

That rule was relaxed before last year’s Tokyo summer Games to allow for protests made “without disruption and with respect for competitors”.

China warned this month that protests at its Winter Olympic venues or on the medal stand could violate Chinese law as well as Olympic rules. It was largely seen as a means of intimidating athletes who might protest over the country’s mass persecution of Uighur Muslims.

“In Ukraine it’s really nervous now,” Heraskevych said. “A lot of news about guns, about weapons, what’s to come in Ukraine, about some armies around Ukraine. It’s not OK. Not in the 21st century. So I decided, before the Olympics, that I would show my position to the world.”

This article was first published by The Times

Russian skating sensation Kamila Valieva failed a drugs test in December, Olympic testers confirmed, and the IOC is now appealing against Russia’s decision to allow her to continue competing in Beijing.

The 15-year-old played a starring role in helping the Russians win the figure skating team gold on Monday.

The next day, the result of a test she took during the Russian championships on December 25 was communicated to Valieva — six weeks after she gave the sample.

On Friday, soon after she was seen practising ahead of next week’s Olympics singles event, the International Testing Agency (ITA) publicly confirmed that her sample contained traces of the banned substance trimetazidine.

Trimetazidine is a metabolic agent used to treat angina and vertigo, but it is banned by the World Anti-Doping Agency (WADA) because it can increase blood flow efficiency and help endurance.

The ITA, which carries out drug testing at the Olympics, said the Russian Anti-Doping Agency (RUSADA) had suspended Valieva when it received the result but she successfully overturned the decision, enabling her to continue at the Beijing Games.

“The IOC will exercise its right to appeal,” the ITA said.

The Court of Arbitration for Sport will hear the case and will make a decision before February 15, when the Olympic singles event starts, the ITA said.

It is just the latest doping scandal surrounding Russian athletes in recent years at Olympic Games.

Russian competitors are taking part in Beijing as the Russian Olympic Committee (ROC) after the nation was banned because of a massive state-sponsored doping scheme at its home 2014 Sochi Olympics.

Valieva’s test was sent to a WADA-accredited laboratory in Stockholm, Sweden and questions will be asked as to why it took so long for it to be processed.

RUSADA said it had been informed that a sharp rise of Covid-19 infections at the start of the year was to blame for the delay.

RUSADA also said it had launched an investigation into the teenage skater’s entourage.

“The timings of sample processing raise serious questions,” Pozdnyakov told the RIA Novosti news agency, suggesting the result had been deliberately released to coincide with the Olympics.

“It seems like someone held the sample until the end of the team skating tournament,” he added.

ROC said Valieva had the right to compete in Beijing and that her team gold medal should stand.

It said it wanted to “draw attention to the fact” that a test Valieva took during the Olympics “gave a negative result”.

Valieva is one of the favourites to win the individual event next week. She became the first woman in history to produce a quadruple jump at an Olympics to help Russia win the team event.

She won the European championship singles title in Estonia in January as Russia swept the gold medals.

The confirmation that Valieva failed a doping test explains why the medals ceremony for the figure skating team event has not taken place.

“The failure to report a test taken in December until after the team event in the Games is a catastrophic failure of the system to protect the public, the integrity of the Games and clean athletes who had to compete,” Tygart told AFP.

“It shouldn’t have happened.”

IOC spokesman Mark Adams said in Beijing: “It’s very important for everyone involved, not least the 15-year-old athlete that is concerned, that we have due process, that it’s seen to be done properly and that people can have confidence in the decisions that are taken.

“We are working as fast as we can under the circumstances to get that.

“Such cases are not helpful to the Games,” he added.