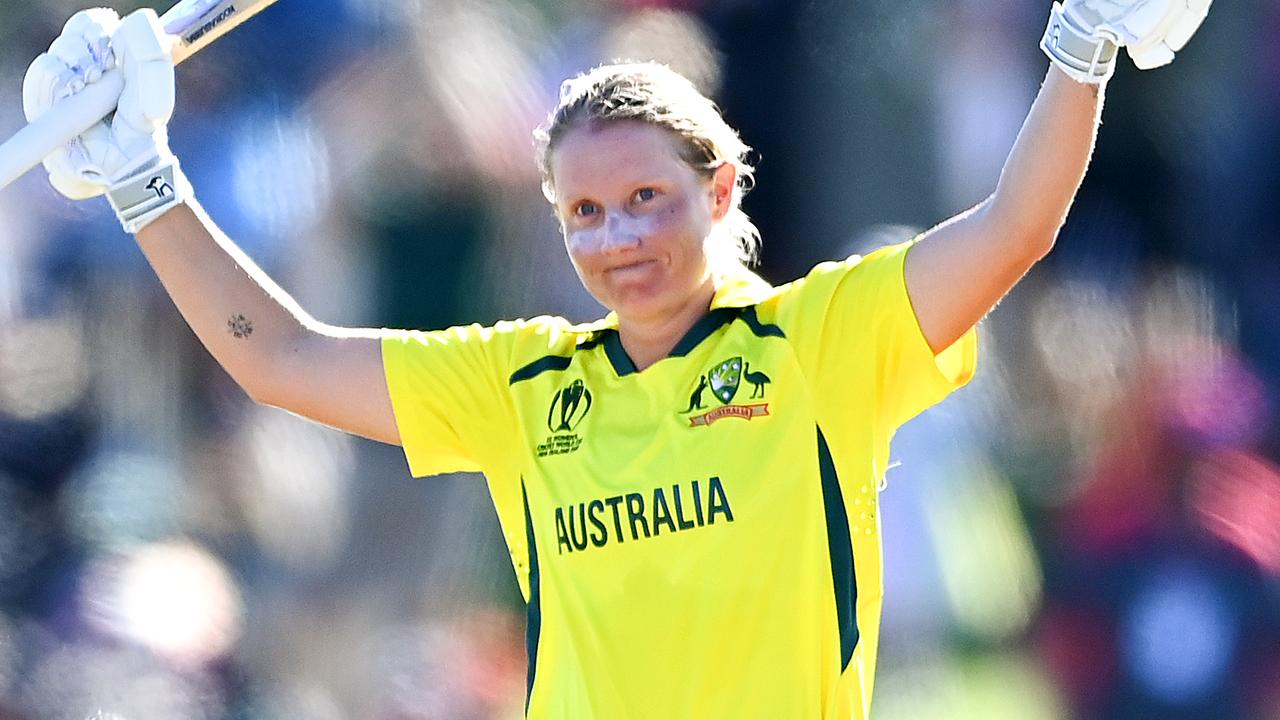 Alyssa Healy has rewritten the history books, putting together one of the most incredible batting performances in World Cup history.

Alyssa Healy has rewritten the history books in Christchurch, putting together one of the most destructive batting performances in World Cup cricket to steer Australia towards a record total against England.

The wicketkeeper pummelled 170 off 138 balls in the must-win final at Hagley Oval to help Australia register a whopping team total of 5/356 from its 50 overs.

Heather Knight won the toss and elected to bowl first, a decision that quickly backfired on the England skipper.

England’s bowlers had no answer for Healy’s masterclass, yelling in frustration every time she found the boundary rope on Sunday morning.

The Aussies were assisted by some sloppy fielding and dropped catches, which only compounded England’s woes in the field.

— the largest individual score in a World Cup final, men’s or women’s

— the most runs in a Women’s World Cup tournament

— the first cricketer to score a century in the semi-final and final of a World Cup tournament, men’s or women’s

— the largest individual score against England in women’s ODIs

— the most boundaries in a Women’s World Cup innings

Cricket reporter Laura Jolly tweeted: “That was one of the best things I’ve ever seen.”

Former Australian captain Lisa Sthalekar posted: “This is ridiculous from @ahealy77! We are witnessing the best innings ever in a FINAL!”

Former England bowler and Fox Cricket commentator Isa Guha posted: “This is why Australia are the best in the world.”

Healy was assisted by Rachael Haynes (68 off 93 balls) and Beth Mooney (62 off 47 balls), forming century partnerships with both left-handers.

The 32-year-old scored a staggering 45 runs from her last 19 deliveries before she was stumped off Anya Shrubsole’s bowling in the 46th over, walking off the ground to a standing ovation.

England somewhat redeemed itself by claiming a handful of late wickets, but the damage had well and truly been done.

The defending champions will need to pull off the largest run chase in women’s ODI history to retain the coveted World Cup trophy.

Healy has become the first cricketer to score 500 runs in a Women’s World Cup tournament.

Alyssa Healy and Beth Mooney have combined for a century stand for the second wicket, reaching the milestone in just 81 deliveries.

This is also now the largest team total in a Women’s World Cup final — and there’s still eight overs remaining.

And things have gone from bad to worse for England, with Tammy Beaumont dropping Healy at short fine leg on 136.

The Australian wicketkeeper now has the highest individual score of the tournament, bettering Meg Lanning’s 135 not out against South Africa.

Soon after, Mooney brought up a half-century, her second of the tournament. And then, Healy became the first cricketer to score 150+ runs in any ICC event final.

This is becoming farcical.

Healy reached triple figures in exactly 100 deliveries against England — it was her second century of the tournament and the fifth of her ODI career.

The cherry on top? Her husband Mitchell Starc was in the crowd to witness her incredible feat.

AAP’s Scott Bailey posted: “This knock from Healy is something ridiculously special.”

The left-hander looked to punch Ecclestone over the off side, but sliced the shot to Tammy Beaumont, who pouched a simple catch at point.

Beth Mooney comes in at No. 3 after being promoted up the order.

Most runs for partnership in a Women’s World Cup tournament

The opening stand between Alyssa Healy and Rachael Haynes has passed 150, making it the largest partnership in a Women’s World Cup final.

Healy has also become the first wicketkeeper to score 400 runs in a Women’s World Cup tournament.

Things are looking pretty grim for England at the moment.

Danni Wyatt put down a touch chance at point in the 21st over, gifting Haynes an extra life at the crease on 47, before teammate Nat Sciver dropped a simple catch at mid-wicket to give Healy a reprieve on 41 later in the same over.

Haynes brought up her half-century soon after, reaching the minor milestone in 69 deliveries.

Australian vice-captain Rachael Haynes has broken the all-time record for most runs in a Women’s World Cup tournament.

The opener has accumulated 458 runs in the 50-over tournament, bettering the previous record set by New Zealand’s Debbie Hockley in the 1997 World Cup in India.

Lindsay Reeler held the previous record for an Australian cricketer, with 448 runs in the 1988 tournament.

Australia was 0/37 at the end of the Powerplay, with Haynes unbeaten on 19 and wicketkeeper Alyssa Healy 15 not out at the other end.

Most runs in a Women’s World Cup tournament

Star all-rounder Ellyse Perry has been selected as a late inclusion for Australia — albeit as a specialist batter.

Perry has been missing from the unbeaten side after leaving the field with back spasms during Australia’s win against South Africa on March 22.

“She’s a massive in for us,” she said after losing the coin toss

“She’s a world class player who plays well in big games. It certainly gives us a big boost.”

Lanning said on Saturday that Perry was a “pretty good” chance after impressing during a tough training session.

She goes into the final without testing how her back would hold up bowling and she has only been put through her paces in the nets.

Perry has put on 146 runs across her five innings so far this World Cup.

“She’s meticulous in everything she does with her training and workload so as soon as she felt those back spasms, she was probably just galvanising herself to the fact that she might miss a game or two, but that she’s basically had her eye on today.”

All-rounder Annabel Sutherland was the unlucky omission from the side.

What time is the World Cup final?

The Women’s World Cup final gets underway at 11am on Sunday morning (AEST).

How to watch the Women’s World Cup final

The only way to watch the final for free is to stream it via Kayo Freebies. It will also be broadcast on Fox Cricket (channel 501).